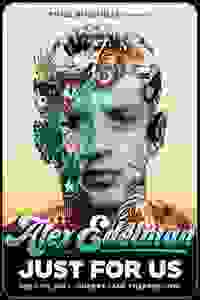 Alex Edelman: Just For Us NYC Reviews and Tickets

In his third solo show, comedian Alex Edelman takes the audience through hilarious anecdotes about his Olympian brother AJ, an unconventional holiday season, and a gorilla that can do sign language. But then he tells the astonishing and frighteningly relevant story that is the center of the piece. After a string of anti-Semitic abuse is directed at Edelman online, he decides to covertly attend a gathering of White Nationalists in New York City and comes face to face with the alt-right abusers.

After a successful run Off-Broadway and a sold-out encore run, the show returns Off-Broadway for a second encore run. 'Just For Us' was also nominated for a Drama Desk Award for Outstanding Solo Performance.

The show is produced by comedian Mike Birbiglia ('Sleepwalk With Me,' 'The New One').

See it if You want to see a smart funny show that will make you think and laugh. Topical without being divisive. Great storytelling.

See it if If you like jewish humor. Some of it was funny.He is not as good as other jewish comics, jackie Mason etc

Don't see it if If you don't understand jewish culture.

See it if you like listening to someone talk who is both brilliant and witty. He is a great story teller and his motions keep you riveted to his words

Don't see it if you do not like what is basically a stand up comic show.

Don't see it if You have no connection to New York City or Jewish culture. You'll miss too many references.

See it if excellent standup with a special New York bent will amuse you for an hour.

Don't see it if you need a longer, multi-character theatrical event to make leaving home worthwhile.

See it if You love funny, engaging, stand-up storytelling in the same vein of Mike Birbiglia — both compelling & hilarious.

Don't see it if You’re not a fan of long-form stand-up or don’t want to hear one guy telling a very idiosyncratic, Jewish story.

See it if you want to hear expert, offbeat storytelling by an ingratiating comedian with something to say. His anecdotes are hilarious yet meaningful.

Don't see it if not interested in primarily Jewish humor, though not necessary to be Jewish to appreciate it.

See it if A polished stand-up comic with great timing and delivery. He's a charmer who had us in stitches. Largely Jewish humor with universal appeal

Don't see it if you don't like stand-up. Very intelligent humor with belly laughs, too. His story about visiting a neo-Nazi meeting in Queens is priceless.

"4/5 Stars! His account of reactionary repartee serves as a framing device for a deeper dive into questions of identity and the limits of empathy. Edleman deftly interweaves disparate tales...into a portrait of the entertainer as a young Jewish man in a polarized society. But he does this without pulling any punchlines: The laughs are plentiful."
Read more

"It’s not hard to ridicule a bunch of bigots; nor, more than half a century after 'Springtime for Hitler,' is the exercise particularly scandalous or groundbreaking, even if it remains surpassingly gratifying when done well. The considerable success of Edelman’s show depends on a second act of infiltration. Cannily, confidently, he turns his brief encounter with this sad-sack anti-Semitic social club into a pretext to examine the much more richly unsettled topic of his own Jewishness...As the show progressed, I found myself more interested in Edelman’s own, troubled 'us,' the one that he implicitly refers to in his title, though he tends to shy away from addressing himself to it."
Read more

It's a fast, funny, thoughtful 75 minutes, packed with stray thoughts that will catch you unawares. (I treasure how he infuriated a UK audience by renaming Brexit "The Great British Break-Off.") This is a highly original approach to stand-up comedy: Edelman's ability to spin humor out of a festering social problem, without trivializing it, is something to cherish.
Read more

Despite the familiar visual trappings--mic stand, performer-blinding stage lights, and a dull curtain backdrop--Edelman's deceptively free-flowing talents hew more towards the monologist Spalding Gray than those of Williams. Like Gray, Edelman is an entrancing storyteller capable of stitching together personal anecdotes into a rich thematic tapestry.
Read more

"The funniest harrowing and touching account of a personal experience you’ll hear this year (and perhaps beyond)...The promising thing about Edelman’s show is that he’s not telling a one-time, nothing-will-top-this story. His Lenny Bruce-like observations of the human condition promise us that there’s more in store from him. And we’ll be looking forward to hearing his take on yet another observation of everyday life."
Read more

I was initially puzzled as to why a man whose full name is David Yosef Shimon ben Elazar Reuven Alex Halevi Edelman would go to a meeting of white supremacist antisemites — unless he was a stand-up comedian who thought he could get a show out of it. And so he has…. leans more toward disparate jokes and funny stories than a focused comic narrative.
Read more

"Edelman taps into much heftier material than his usual riffs about Koko, the sign-language-using gorilla...Throughout, Edelman emerges as a disarming charmer whom you might imagine could ingratiate himself — at least for a while — even with people who object to his very existence. And one who not only lived to tell the tale, but tells it with wit and flare. Can you believe it?"
Read more

"Despite Alex Edelman’s opening caveat that 'my comedy barely works if you’re not a Jew from the Upper East Side,' he is one of the rare, masterful stand-up comics who can 'cast out' and then successfully 'reel back in' a diverse audience...Director Adam Brace has blocked the performer on the barest of stages, whose stark, redbrick back wall frames the barest of props—a few stools and a microphone. This allows the audience to concentrate on Edelman’s facial expressions and movement."
Read more