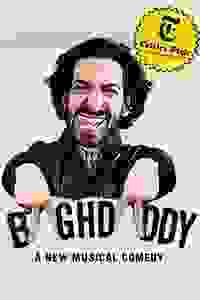 Baghdaddy begins in a support group for the disgraced spies who helped start the Iraq War, and quickly escalates into a manic musical comedy where the characters tell their stories and search for redemption.

The show begins in a church basement, where disgraced spies gather for a support group meeting. The action soon shifts to Frankfurt Airport, where a mysterious Iraqi defector claims he built secret bio-weapons labs. At CIA headquarters, our other characters are contending with their own ambitions, rash decisions, inflexible bosses, unrequited affections, and unremitting boredom, when a fax arrives from Germany with a golden opportunity. If the defector's story holds up, it will be the ticket out of the basement and into a corner office. It's all fun and games until the looming cataclysm changes everything. 'Baghdaddy' was previously produced in New York in 2015 under the title 'Who’s Your Baghdaddy?' at the Actors Temple Theatre.

See it if you enjoy musicals based on current events. This has energy and insight, although I'm not sure that it needed to be a musical.

Don't see it if you're unwilling to face the horrible mistakes made in the lead-up to the Iraq War. Or if you hate musicals. Read more

See it if you can get past the title & enjoy a sharp, clever, jaunty (& scattered) new musical/sketch show about gov't intrigue & the Iraqi War.

Don't see it if you don't have at least a basic knowledge of the timeline, events & characters involved in the Iraqi War.

See it if You can accept musical sketches about the run-up to the Iraq War with odd characters and loopy dancing. It's very good, not must-see,however

Don't see it if Uninterested in the human quirks that may have been the impetus for waging war. Odd changes of tone & some unneeded characters may bug you. Read more

See it if want your thoughts provoked in a tremendously entertaining way.

Don't see it if don't to have to think about the world.

See it if Seems like a report of a Congressional investigation put into songs. Timely in that mistakes at the top could lead to war.

Don't see it if You don't want to revisit the Iraq war. Read more

See it if you like theater can both entertain and challenge your thinking. I will be thinking about this one long after, but it was also a lot of fun!

See it if You are interested in a contemporary musical based in fact; are willing to find humor in war

Don't see it if You want to avoid any topic of politics or the Iraq War, are looking for a splashy production Read more

See it if great acting and staging, a musical with depth,

"One of the crucial issues with 'Baghdaddy' is the tone...It is nearly impossible to address the darkness and gravity of the Iraq War when your actors are bouncing off the ceilings...The actors all give committed performances, but there is very little space for complex characters...I kept searching for unity in the music and book to explain why this story is a musical, I never found it...Whenever the show seems to gain steam...the action veers back towards a song that is simply a distraction."
Read more

“A great musical trapped inside of a good musical…The production is sometimes at battle with itself. At its best, it is a touching look at how small, human flaws can escalate toward catastrophe. At its worst, it is sketch comedy, albeit with free donuts and coffee for the audience…Trimming the title was a good idea. Decluttering some of the on-stage action would have been an even better one.”
Read more

"I implore you to grab tickets for 'Baghdaddy,' the slick and clever roller-coaster musical...It’s even more potent now than it originally was...The creators handle the difficult aspects of the show with a great deal of respect and dignity...As smart satire often does, it makes the most unbearable circumstances bearable...Pailet has secured most of his 2015 cast, but the newcomers fit beautifully into the show. Shields’ choreography is sharp and inventive, and musically the show soars."
Read more

“The talented cast perform with gusto. The music by Marshall Pailet (who also directs) is eclectic, the lyrics by A.D. Penedo are often clever, and the book by both of them is almost consistently lively. The choreography by Misha Shields adds fun…My only quibble is that it could benefit from a slight trim. The play is certainly timely as the prospect of getting into a war by accident seems all too real.”
Read more

"Each member of the cast captures the distinctive personality and motivations of the eminently laughable but ultimately dangerous characters in consistently terrific performances...Zany choreography by Misha Shields brings sidesplitting physicality to the hilarious narrative and score...'Baghdaddy' will have you laughing out loud at its absurdist humor, while shaking your head in horror at the true absurdity of what really happened and the shocking casualties that resulted."
Read more

"A good show with a bad name...This magnificently rehearsed and talented cast adds energy, enthusiasm, heart, and soul to the script...The play suffers split personality...It's a bit all over the map but gets the point across. I think it needs some fine tuning and could really be a powerhouse as the concept is really serious and absolutely something that needs to be shown...For now, trust me it's worth the price of admission."
Read more

"Some of the smart and sharp lyrics might seem provocative, but they never fall off the edge of good taste and are always true to the characters. The energetic and often ironic choreography and charged performances of the entire cast keep you on the edge of your seat for the entire time...The unobtrusive design and the engagement of the space could be developed further, but who cares about this if you have a bomb of a script and an explosive cast in front of you?"
Read more

"The first half is hilarious. It is a musical and political Keystone Cops caper that is presented with the perfect amount of crazy. And then 9/11 hits the narrative and intermission hits the show. The second half is tonally completely different and yet just as perfect...'Baghdaddy' is a marvel. It is the story of a stupid war told with humor and fun, but the correct amount of compassion...Pailet puts his energetic cast through a non-stop emotional ride, and the audience follows with gusto."
Read more