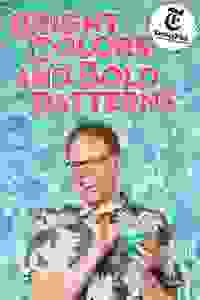 The solo comedy about what gets left behind as homosexuality moves into the mainstream returns for an encore run. Directed by Michael Urie ('Ugly Betty,' 'Buyer & Cellar').

Josh and Brennan are about to get married in Palm Springs on a lovely Saturday afternoon. However, the night before becomes a drunken, drug-fueled riot because their friend Gerry has arrived, furious that their invitation says, "Please refrain from wearing bright colors or bold patterns." In the struggle for equality, what do we really want? What do we lose? And is there any cocaine left? 'Bright Colors and Bold Patterns' was written and originally performed by Outfest Award winner Drew Droege, who is best known for his online videos as Chloë Sevigny. Jeff Hiller ('Bloody Bloody Andrew Jackson') now stars.

See it if you want to enjoy a thoughtful, witty, fast-paced, over-the-top (yet authentic) 1-man tour-de-force about being gay in the gay marriage era.

Don't see it if you're easily offended by flamboyant gay patter. [Sure, the character's an insufferable stereotype, but the play has heart & lots of laughs] Read more

See it if ...you are interested in gay theater, or gay history, or the current state of gay life among a subset of gay men,

See it if You want laugh and have a good time.

Don't see it if Gay topic in this show.

See it if You love funny, over-the-top bitchy gay characters being extra.

Don't see it if Watching a Carson Kressley-esque character bitch for 75 minutes isn’t your thing.

See it if you like a sarcastic one-man show.

Don't see it if you don't find entertainment in watching the demise of a boozy and cynical depressive at a party. That guy.

See it if You'd enjoy a 1-man show about a guy who's drinking, out with friends, telling stories, etc. But who's really lonely deep down inside.

Don't see it if You'd want a larger cast. But the 85 minutes goes by fast.

See it if You want to find out if Bright Colors and Bold Patterns is a synonym for “gay”.

Don't see it if You don’t care to find out.

"As played with devastatingly funny panache by Mr. Droege himself, Gerry would probably be overwhelming in real life...But at a safe distance onstage, he’s a delight — a slightly exhausting one (10 minutes less would be more), but still a delight...Plays do not get much gayer than 'Bright Colors,' which opened in a spiffy production directed by Michael Urie...This 80-minute evening is essentially an audience with Gerry...I believe the clinical term is 'hot mess.'"
Read more

“80 minutes of classic gay snark...Droege is hilarious as Gerry, causing the audience to laugh loudly and often at the character's antics, which include a number of popular culture references...While the section in which Gerry lets down his guard is needed in a play that would otherwise be too superficial, this portion dragged a bit and could have been shorter. Nevertheless, 'Bright Colors' is an entertaining character sketch. It might not get you thinking very much, but it will keep you laughing.”
Read more

"A theatrical display of comedic genius. Any fan of Droege's other work will instantly recognize his quick wit, less-then-obvious humor, and underlying intelligence, all quietly commanding a seemingly chaotic, over-the-top ship...Hiller gives an awe-inspiring display of acting craftsmanship...The bare bones of his performance have clearly been guided by Urie's firm and expert handling of comedy in basic human behavior."
Read more

“Droege rattles off rapid-fire popular culture references with a coked-up energy that somehow breathes enough to allow his audience to digest and laugh at his outlandish observations...Director Michael Urie has helped Droege nail the pacing, though a montage transition halfway through feels a bit clumsy…Droege teeters on the edge of sentimental with childhood tales of ostracization...but he earns these pauses from breakneck comedy by being vulnerable and truthful.”
Read more

"The tragicomedy of the season...It is to Droege’s immense credit as a playwright and actor that the play is so smooth...An incredible feat: constructing dialogue and performance so immaculately that even nonspeaking invisible roles are full three-dimensional characters...Underneath the hilarity, however, lies poignancy...Gerry is a flawed man. He represents the best and worst of us...Droege creates the world, and Urie colors it. This show is a delight."
Read more

“A hilariously campy night at the theatre...A fearless solo performance with a hell of a lot of heart— though the main character, Gerry, wouldn’t likely admit it...I initially cringed when Gerry spoke at the empty spots where Mack and Dwayne should be, but Droege, who not only stars in but also wrote the piece, pulls the choice off with aplomb — in no small part because of the dazzling buffet of facial expressions at his command from moment to moment.”
Read more

"Fucking hilarious...Hiller is a star. His collaboration with Urie has resulted in a nuanced and hilarious performance, one where the audience immediately trusts Hiller to take us on a ride with him. His performance is so crystal-clear that even when the writing falters, as it gets serious...we’re still hooked because we’re waiting for his next wisecrack to shut the house down. Urie and Hiller have created extremely clear focal points for each of the other on-stage characters."
Read more