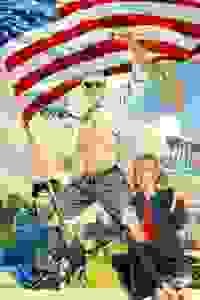 A satirical musical set in the '90s about the presidency of William Clinton and the various scandals and characters surrounding it.

It's 1992. Scrunchies are in and mullets are out. 'Baywatch' is a hit and Time Magazine's Man of the Year is Bill Clinton. He's optimistic, charismatic, and he's bringing "saxy" back. 'Clinton the Musical' is a satirical look at the 42nd President who upholds the ideals of Lady Liberty while simultaneously charming the pantsuit off her. With Hillary by his side, he's bringing new life to the party.

Don't see it if you're a republican.

See it if You like political satires & interested in the Clintons story. Fav moment: Lewinsky sings "I'm f**king the f**king President" #CatchySong

Don't see it if You don't like over-the-top campy shows or are too young to remember Bill's run as president.

Smartly silly, hilariously impudent and sneakily compassionate, it is nearly guaranteed to leave you humming a bouncy, exuberant tune...'Clinton the Musical' isn’t the sort of show that the real-life subjects are likely to find entertaining, but for the rest of us, it’s 95 minutes of healthy catharsis."
Read more

"This satirical, musical take on Bill Clinton’s presidency from 1993 to 2001 hits American politics right on its semi-bulbous nose. Backed by a stellar cast of singing reporters, dancing Senate cardboard cutouts and a special appearance by that unforgettable blue dress, 'Clinton the Musical' is a wildly fun reminder that politics are an absurd battle of wills."
Read more

"'Good evening,' says the former first lady. 'I’d like to tell you the story of my first presidency.' The line might sound like a lukewarm zinger but it sets the tone for sharper jabs that will be flung...This production reopens a closet of skeletons the Clintons would like for America to forget: These scandals unfold through a score of tongue-in-cheek ditties worthy of 'Avenue Q.'"
Read more

"The 95-minute musical doesn’t offer much in the way of a fresh or incisive take on the Clinton White House years. Though it’s bolstered by some first-rate performers, 'Clinton the Musical' feels as if it has arrived from some far-off land where news of the Clintons has only recently been received. The Hodges were beaten to most of their punches eons ago by the likes of 'Saturday Night Live' and other comedy groups."
Read more

"Kenneth Starr steals the show as the Count Chocula of independent counsels. It’s a pity he isn’t the center of this broad, profanity-laden satire...Most of the humor is painfully dumb and crass."
Read more

"This uproarious musical romp deals with Mr. Clinton's duplicitous nature...'Clinton' was part of last year's New York Musical Theatre Festival, where it was hands-down the funniest show in the pack. It has been shaved down to an intermissionless 95 minutes. While many of the changes are smart , others are unfortunate...Director Dan Knechtges compensates for what has been lost by delivering a fast-paced production full of design surprises."
Read more

"Gently spoofing the foibles of the first couple while admiring their politics, the lively and fun 95-minute show is well timed. A tasty bit of junk food, Dan Knechtges' madcap mounting captures the same comical spirit as a 'Saturday Night Live' sketch...While the music is generally serviceable, the lyrics are frequently clever and the songs fulfill their purpose to give the talented players chances to give bust-out performances."
Read more

"Paul Hodge and Michael Hodge have kept their fiercely funny and taut grip on William Jefferson Clinton and Hillary Rodham Clinton. It also remains a spirited romp. This farcical assessment of their tumultuous eight years in the White House contains everything you really need to know about their serious intentions as well as their incredulous shenanigans."
Read more

"History never looked so hilarious...Sure to be a hit with '90s nostalgics, the humor will no doubt pull millennials in as well. It is a hysterical and toe-tapping romp through a recent time in history, and this reviewer feels the show is destined for Broadway."
Read more

"Every once in a while a reviewer feels the need to be kind. 'Clinton The Musical' has generated that feeling in me. So just let me be kind and say that the tuner at New World Stages is perfectly awful... Whatever they were thinking when they jerry-rigged this entertainment(?), they were a long distance from anything genuine."
Read more

"With a tale that the audience already knows what comes next isn’t quite the surprise. It’s how Hodges and director Dan Knechtges reveal it. And that’s what makes 'Clinton the Musical' a blast to watch. By establishing the saga as a typical piece of musical theater, equipped with a hero with a dream, a villain with an evil scheme, a volatile love plot line, and an assortment of zany characters, how reality fits into the musical themes is where the comedy shines."
Read more

"Just in time for Hillary’s announcement of a Presidential bid comes a smartly satirical reflection of the trials and tribulations of William Jefferson Clinton and his family that will leave audiences aghast and amused... 'Clinton The Musical' is everything great satire ought to be: clever, funny, well-acted, and above all, thoughtful. No matter what side of the aisle you favor, this is one wild party you won’t want to miss."
Read more

"Writers Paul Hodge and Michael Hodge leave no scandal or personage untouched in this cartoonish tuner that’s been directed and choreographed with hyperkinetic perkiness by Daniel Knechtiges. And though there’s a certain topicality to the proceedings, the show ultimately feels like a comedy sketch that has been stretched well beyond its breaking point."
Read more

"It’s certainly the right time for this scathingly funny show...There is plenty of material that will get laughs from Republicans, Democrats and people of all political parties. Audiences never know which side the show is on, but we know most of what we’re seeing is sophomoric and hysterical simultaneously...No matter which side you’re on, 'Clinton The Musical' will get your vote as one of the spring’s best spoofs of Washington politics."
Read more

"This brilliant comedy is filled with moments that made me and the entire audience laugh out loud and ask ourselves, 'Can they say that?' It captures so much that we love about musical comedy. Despite it’s minor flaws of production here and there, it is a divine vehicle for amazing performances and some of the best musical comedy New York has seen in quite some time."
Read more