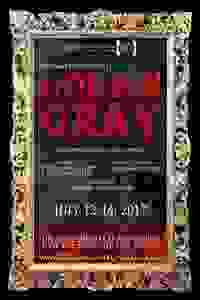 Part of the New York Musical Festival: With found objects and big imaginations, an outcast troupe of players reinvents Oscar Wilde’s 1890 gothic tale of the young and mysterious Dorian Gray.

Gray's dashing looks are captured in a single portrait that allows him to remain young and untouched as he spirals into a lifestyle of dark secrets and dangerous indulgences. Featuring a haunting and romantic score, 'Dorian Gray' begs the question: Do our sins define our true nature or are we damned by ignorance and mediocrity?

This is a Beta Musicals at NYMF. Beta Musicals are new musicals that are further along in their development process than readings, but not produced with all the elements of a full production. Often, Beta Musicals will focus on a few keys elements they are interested in exploring through the NYMF process, such as choreography, puppetry, or specific design components. As Beta Musicals are still in active development, there will be a feedback form available to audiences to share their thoughts.

See it if you enjoy the story of Dorian Gray told to music. Simply but nicely staged. It does need some improvements especially in 2nd act.

Don't see it if you don't like the story of Dorian Gray. I think the NYMF did a nice job and with some improvements will have a show that can move on.

See it if You have a friend in the show, as some in the audience did.

Don't see it if You expect New York to produce superior voices at any stage of a show's development. Read more

See it if you have a friend in the cast. Has little potential under this direction - the actors read the story, not play it. Singing is BAD!

Don't see it if you don't want to waste your time. Painful for the ears. Read more

See it if you enjoy the story.

See it if you like shows that have potential but aren't there. I liked most of the musical numbers (unique music, clever lyrics) but book needs work.

See it if you like cliched characters singing too many love songs.

Don't see it if you like the plot and characters in the original Dorian Gray book/movie.

See it if you want to see some great young actors really dedicating themselves to a show.

Don't see it if you want the musical to stay faithful to the book. The last third of the show introduces an original character who severely alters the end.

46
Badly directed with an under-rehearsed cast

See it if You have no airconditioning in your home...it's cool in the theatre. You like watching under rehearsed young actors move boxes throughout.

Don't see it if You want a well directed musical with 4 basic songs and variations of them repeated. Actors trying, but failing because of their director Read more

"DeLeone and Layton are standouts. Both bring nuance to a production that lacks it. Both sing well and have clearly made character decisions beyond the written page...Mandracchia’s direction is pedestrian...Lyrics lack specificity and bite...Many tunes meander dissipating impact...'Dorian Gray' is good source material for a musical. Dayett and Mucchetti capture its darkness but over-complicate a story more powerful in simpler telling."
Read more

"Mandracchia's direction is pedestrian and misguided...The story is elementary because of the notoriety of the novel, but Dayett manages to complicate matters and loses focus, which results in a laborious book. The music is dark but ineffective, unable to create an impact...Lyrics do not serve the story or move the plot forward and at times detract from the music. The cast is uneven...This product might be well suited for a thesis but is not yet ready as a professional production."
Read more