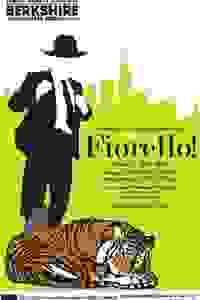 Berkshire Theatre Group presents a rare revival of the Tony-winning musical about Mayor La Guardia and his battle for the people of NYC. Created by the songwriting team behind 'Fiddler on the Roof' and 'She Loves Me.'

Tammany Hall is in dire need of an honest leader, and Fiorello La Guardia is just the man for the job. Battling against the corrupt, political puppets of New York City, he vows to clean up the Big Apple. A man of the people, Fiorello uses his wit and charm to fight for citizens' rights. Based on the real-life rise to power of Mayor Fiorello La Guardia, 'Fiorello!' is one of only nine musicals to have won the esteemed Pulitzer Prize for Drama. Featuring music and lyrics by Jerry Bock and Sheldon Harnick, and a book by George Abbott and Jerome Weidman.

See it if You want to see a seldom produced show that's really an old gem. Like watching a classic black and white movie.

Don't see it if You can't appreciate a show on a shoestring. The music is a little on the light side with just a piano and a violin but voices are 1st rate.

See it if you've never seen Fiorello. I saw it shine at 2013 Encores. This one was inferior, but the songs (both lyrics and music) still delight.

Don't see it if you want a professional production; this is summer stock/college level. Dora, tho, was a standout. A pleasant outing, but not NYC quality.

See it if you would like an entertaining review of LaGuardia's pre-mayoral days. Not a current-style musical but the young cast is very talented.

Don't see it if you are expecting an over the top musical. No memorable tunes here and it is just as much dialogue as music.

See it if You would like a fun biographical show with catchy songs and zippy dances. I loved the barbershop pieces by the 6 guys.

Don't see it if You want something deeper, more dramatic, or more modern.

Don't see it if Slow, plot driven musicals bore you. Has a bit of "summer stock" feel to it (esp choreography)

Don't see it if Why does it have to be so far way for us?

See it if you're interested in biographical stories or old-fashioned musicals with weight and fluff in equal measure.

Don't see it if you'd rather see something edgy or groundbreaking.

See it if I'm trying, but can't think of any reason to recommend. There is so much talent and creativity on NYC stages, go see something else.

Don't see it if My friends and I left at intermission. I see no reason to see an ameteur production for the amount of money being charged. Read more

"Powered by a notably youthful cast, the production has a sunny-spirited exuberance...For a tiny band, the score retains its bounce, its bite, its frisky melodic charm, thanks to the musicianship of the players and principals alike...It’s not hard to see why 'Fiorello!' remains cherished today mostly for its score...'Fiorello!' lacks a strong narrative arc, which may explain why it has never been revived on Broadway."
Read more

"A timely work...Despite having an absolutely superlative score, 'Fiorello!' is rarely performed, which could be the result of its book (which is well-crafted but bulky)...The photogenic actors look as if they just graduated from college. And while Austin Scott Lombardi shows considerable pep and drive in the title role, he hardly resembles 'The Little Flower' physically. Under the direction of Bob Moss, the production is full of tender emotion, dramatically effective and highly enjoyable."
Read more

"With a youthful, fresh-faced cast and no-frills staging by Bob Moss, it feels like good summer stock...Moss directs the show with Shakespearean fluidity, allowing one scene to seamlessly flow into the next...While the underscoring occasionally feels thin, the vocals never do...Parts of the show come off as passé, but it's hard not to be charmed by Bock and Harnick's hummable melodies, delivered by an enthusiastic cast. You'll be singing the numbers all the way home."
Read more

"The small-scale Berkshire production is played by a likable ensemble of actors in their 20s, many of whom are too young to play their meaty character roles...There is certainly cleverness in Moss' staging, and set designer Carl Sprague's cut-outs of Manhattan skyscrapers and street signs look great...'Fiorello!' is a fine musical deserving of a professional New York staging. While this new mounting isn't a bad one, it's essentially a college-level production charging Off-Broadway prices."
Read more

"Would have been better left in the Berkshire Hills...Bock and Harnick's score is nearly as good as those for 'Fiddler' and 'She Loves Me,' and it's always a pleasure to hear it again...The biggest problem with this 'Fiorello!' is the cast--bright, fresh-faced young people, trained in all the requisite musical theatre skills...They thoroughly fail to suggest the rough-and-tumble New York of the early 20th century...The best thing about this production is its design."
Read more

"The first full-scale New York revival and the first Off-Broadway production ever, The Berkshire Theatre Group’s staging of the Bock and Harnick musical 'Fiorello!' has moved to New York’s East 13th Street Theater from Stockbridge, Massachusetts. This delightful production proves that not only is this rarely revived show still fresh and witty, but that with its young and vital cast, it is still a captivating, heartwarming evening in the theater."
Read more

"Struggles—and sometimes succeeds—in finding relevancy nearly 60 years later...Despite the problematic Golden Age-style writing and the less-than-consistent dialect work, there are a few performances that stick with you...All in all, this is a thoughtful and effective production of material that may feel dated in 2016. And it is certainly a visually and musically lovely piece of theater—the singing is close to flawless, the choreography works perfectly, and Moss creates striking stage pictures."
Read more

"All in all, the young talented BTG performers seem a little on the young side (because they are) to portray some of the roles, but their talent and enthusiasm overshadow...Highlight performances come from Chelsea Cree Groen as Dora, Rebecca Brudner as Thea, Rylan Morsbach as Ben, as well as Lombardi as LaGuardia...The clever songs and lyrics keep the audience enamored, the timeliness of political corruption always on the money (no pun intended)."
Read more