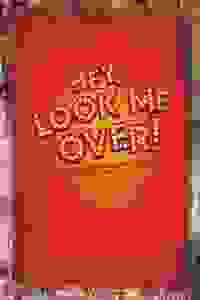 View in admin
Hey, Look Me Over!
NYC: Midtown W
81
Score it Scored!

Hey, Look Me Over! NYC Reviews and Tickets

Encores! kicks off its 25th season with a new musical about Broadway gems they have not yet revived. Featuring a star-studded cast including Tony Winner Bebe Neuwirth and Tony nominee Vanessa Williams.

Bob Martin, as his beloved Man in Chair character from 'The Drowsy Chaperone,' plays an opinionated Encores! subscriber who leads the audience on a guided (and sometimes mis-guided) tour of his favorite scenes and songs from musicals he’s always wanted to see at City Center: 'All American,' 'George M!,' 'Greenwillow,' 'Jamaica,' 'Mack & Mabel,' 'Milk and Honey,' 'Sail Away,' and 'Wildcat.'

See it if you love well-performed Broadway songs. HLMO is chock-full of them. Bob Martin (Drowsy Chaperone) is your charming tour guide. Uplifting.

Don't see it if you want only old favorites; many songs are obscure...a few aren't good. Great orchestra occasionally overpowers. Little context given for Read more

78
Scenes from 7 celebrated but rarely-produced musicals: some rich, others forgettable

Don't see it if great old stars Vanessa Williams and Bebe Neuwirth past their prime vocally; only a few performances evoked major applause

Don't see it if you are fixed on an entire production of one show ala the tradition for Encores (The variety worked here) We did miss Joel Grey though.

See it if you like to hear excerpts from lesser known musicals with a great cast and wonderful orchestra. Great Encores.

Don't see it if you like only well known musicals or do not like musicals without full staging. Read more

See it if You want to hear mostly obscure musical theatre songs & scores performed by a top-notch orchestra and your favorite Broadway stars.

Don't see it if You think flop musicals were flops for a reason and there’s no need to rehash them, especially in snippets over 2.5 hours.

See it if you'd love a delightful return of Man In Chair from The Drowsy Chaperone. (He hosts the evening and is just as wonderful as ever.)

Don't see it if you'd be frustrated by seeing 15 minutes of scenes and songs from each musical, which is rarely enough time to care about what's happening.

Don't see it if You want more well-known musicals. You don't like the revue format. You want a contemporary musical.

92
Great singing, Interesting to see these forgotten shows, For someone who loves musicals and broadway history

See it if To see some unforgettable numbers. I really enjoyed it although songs were uneven. Stay to the end for last two numbers.

Don't see it if If you do not enjoy musicals and have no interest in seeing shows that were not hits, for whatever reason, in their time. Read more

"A peculiar and inevitably incoherent assemblage conceived...Though Mr. Martin’s interstitial jokes are often funny, they are not substantive enough to make the selections seem anything more than convenient...There are remarkable performances along the way...For the most part 'Hey, Look Me Over!' has little new to say about its old sources. It will be of interest to historians, if not to history."
Read more

"Martin's presence was particularly helpful since 'Hey, Look Me Over!' proves to be a textbook example of a mixed bag...There is the superb 30-piece orchestra conducted by Rob Berman, delivering lush orchestrations of the music...The problem is, since it's safe to say that all but the most ardent musical theater buffs are probably unfamiliar with much of the material, the dramatic scenes feel scattered and confusing, more often tedious than enlightening."
Read more

"Offers slivers of 10 lesser-known musicals...And for good reason, they’ve all got issues — and a sliver is enough, thanks very much. Still, Encores! deserves credit for trying out an experiment and assembling a game cast...This 2 1/2-hour revue isn’t about wall-to-wall hits and showstoppers. Still, bright spots shine...Even when an Encores! production leaves something to be desired, it’s a reminder that looking back helps you see where you are and where you’re going."
Read more

"An unusual and uneven tour of various musicals...This is not a concert, but rather a super sampler of overtures, songs, and dialogue from each musical...The resulting show is sometimes enjoyable but often clunky and disorienting, with some great solos and duets followed by insipid dialogue and ensemble numbers. While most of these shows do not deserve full Encores! productions, it is difficult to take them seriously on their own terms in this rushed and limited context."
Read more

"Each was created by accomplished Broadway professionals who knew how to inject a few choice moments of showbiz panache...This isn't just a song and dance concert...The books of the musicals are also represented, allowing audiences a taste of the characters and plots...In a show featuring terrific performances by contemporary theatre stars, that connection between musical theatre's past and present is a thoughtful example of what makes City Center Encores! so indispensable."
Read more

"It is, indeed, uneven, despite the participation by many Broadway notables...Encores! has given us a brew that includes some thrilling moments, some also-rans, and the perfect host in Bob Martin's 'Man in Chair' character. The potpourri of excerpts that make up the revue defies us to discern any logic to its overall shape and form, but if any of the featured shows or performers are on your I-always-wanted-to-see-that list, then by all means head on out to City Center."
Read more

"Like some of the shows it samples, this presentation is imperfect but is overall entertaining. Mr. Viertel's conception also includes an arguably irksome framing device...Martin addresses the audience to offer commentary, often tells inside jokes and interacts with the cast. Depending on one’s sensibilities, this is either an inspired or an insufferable device. However, it doesn’t mar the actual production...Bruni’s staging is resourceful, brisk, and conveys the essence of all the shows."
Read more

"Narrated by the hilarious Bob Martin...this revue-like piece – nicely directed by Marc Bruni and choreographed by Denis Jones — is made even more delicious by the presence of some of Broadway’s biggest luminaries...Yes, the show is sometimes a little confusing (if you don’t know all the source material) and a tad overlong. But it’s mostly (to paraphrase a title from 'Greenwillow') 'A Night Borrowed from Heaven,' and a very fitting way to start off the next quarter century of Encores!"
Read more