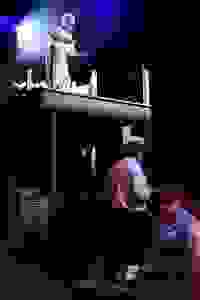 View in admin
In My Father's Words
NYC: Midtown E
100
Score it Scored!

In My Father's Words NYC Reviews and Tickets

Part of 59E59's "Brits Off-Broadway" Festival, a family drama about identity and language, and the utter indivisibility between the two.

In an old house by the shore of Lake Ontario in Canada, Louis battles with his elderly father, Don, whose decline into dementia is gradually robbing him of the ability to speak. Into their lives comes Flora, a caregiver. Flora, who is of Scottish heritage, understands that the 'nonsense' that Don speaks is fragmented Gaelic, opening up an ocean of revelations and buried family history spanning the Atlantic.

See it if You have ever been intrested in life outside of watching boring television.

Don't see it if You're content with your boring Netflix life.

"Despite its alluring linguistic surface, 'In My Father's Words' is a standard daddy-issues drama...There's enough intelligence at work in 'In My Father's Words' that one feels genuine dismay when it falls back on family-drama formulas. Still, the passages in Gaelic make a distinctive music of their own. This is a play that revels in the sheer beauty of words; unfortunately, it is also a little fond of clichés."
Read more

"The inability of fathers and sons to connect with one another is not exactly a breakthrough theatrical concept, but playwright Young brings in enough fresh ideas about memory, identity, and the magnificent power of language in his three-character play 'In My Father’s Words' to keep it from falling over the cliff of cliché and sentimentality...Once the play gets past the predictable parts it really takes off, as do the performances by the excellent cast."
Read more

"It tackles heavy issues, this play is warm, unexpectedly charming, and powerful. The Scottish actors’ portrayals are very satisfying, the set design is fresh, and direction by Phillip Howard is tighter than a ship captain’s. This little show takes on many epics with real curiosity, depositing old tales into the blood of this play. And soon 'In My Father’s Words' itself reads like an epic with something new to say about discovering inward and out."
Read more

"In fact, 'In My Father's Words' might be a truly great play if the author could have figured out a satisfactory ending. As it is, Young introduces too many plot lines and leaves too many questions unanswered...A weak ending in any play is a disappointment, but in such a truly glorious play, it is heartbreaking. It would be wonderful if Young would take a second look, go back to the drawing board and give us an ending worthy of this heartrending and penetrating work."
Read more

"'In My Father’s Words' is a bittersweet tale of loss and language. The story arc is not so unfamiliar, but Philip Howard’s attentive direction puts the right amount of emphasis on the play's tender moments, which are as captivating as the unfolding revelations."
Read more

"'In My Father’s Words' reveals the importance of the language of heritage and the power of communication to heal. With the poetic beauty of revisiting an ancient father/son estrangement, the playwright cleverly spins a new story giving it a modern twist, helped by fine direction, music, and creative set design."
Read more

"The script is as layered as my great-grandmother’s desserts. We have fathers and sons who can’t communicate; a professor learning Gaelic from a woman without a degree. What makes this play so very brilliant is that the writing delivers all of this without becoming a lecture. One of the more elegantly crafted productions I have seen this year."
Read more

"Justin Young's three-hander looks as though it's going to be another sentimental play about dementia, but it turns out to be a good deal more sophisticated. "In My Father's Words" is about memory, identity, sacrifice, and the near impossibility of true communication...The play mirrors Hollywood's obsession with ambitious sons and dysfunctional fathers. But the author has richer things to say about the trauma of cultural separation and the irreplaceable poetry of dead and minority languages."
Read more

"What at first looks like a quiet play about fathers, sons, and everyday dysfunction opens itself out to grander themes of odyssey, exile and the gulf that can open up among families when separated by war...While played primarily in English, Gaelic translations projected onto screens become key to the play's over-riding lyricism. The languid score adds to the mood of poignancy and warmth."
Read more

"The piece is a clever, engrossing and affecting exploration of memory, language and identity...Justin Young’s play is, simultaneously, a powerfully universal expression of the migrant experience and a brilliantly particular window onto the history of the Scottish diaspora, written with a redeeming style and wit. Philip Howard’s handsome, beautifully weighted production boasts a splendid design and fine projections. It also has a top class cast."
Read more

"Plays about dementia are everywhere, in the ageing world of the 21st century, and are often both repetitive and depressing. That’s not the case, though, with Justin Young’s rich and thoughtful new play...If this narrative curve is slightly sentimental, though, it’s brought to life with great force in Philip Howard’s memorable production."
Read more