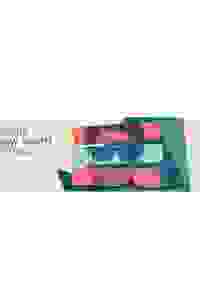 In Adam Seidel's 'American Outlaws,' directed by John Pierson, a love triangle develops between a hit man, a self-destructive accountant. and his unhappy wife.

In Cary Pepper's 'Mark My Worms,' directed by Michael Hogan, fledgling actor Mason has been cast in a newly discovered, never-before-seen play by the world-class absurdist LaSalle Montclare. Problem is, the estate insists on it being performed exactly as written, and Montclare was a terrible typist.

Gabe McKinley's 'Homebody,' directed by John Pierson, is a macabre tale about a young, poverty-stricken writer who is forced to move back in with his mother.

In the world premiere of Neil LaBute's 'What Happens in Vegas,' directed by Kel Haney, a man and a woman break down the cost of an evening of passion in Sin City.

See it if Four satires with fresh ideas. I'd give them 80-85-50-75. The humor ranged from racy to dark to silly. Overall, an enjoyable time.

Don't see it if You would mind sitting through one piece that is weaker than the others. You are looking for more overall depth.

See it if You want some nice, quick and fun shows. The Labute show was my least favorite of the four and that was still good. 3rd was the best

See it if you enjoy well written short plays.Naturally I enjoyed some more than others, but all were worth seeing.For the most part,acting was great

Don't see it if you don't like new plays.These aren't light and fluffy.They have something to say, and say it well.Several of them will stay with you.

See it if You’re a Neil LaBute fan. You appreciate LaBute’s style of shocking the audience onn

Don't see it if You’re looking for something light and breezy, there are a few monologue plays on provocative topics.

See it if you like one act plays, good dialog, fine acting, interesting & perceptive "take" on present day issues such as racism and human psychology.

Don't see it if dislike one act plays that deal with serious issues including nuanced studies of racism and human frailties.

See it if You want to be challenged emotionally and intellectually by a writer who is happy to make you uncomfortable and demands you think & feel.

Don't see it if you are unwilling to be shaken up, especially by frighteningly clever insights into horrible politics. Read more

"Theatre enthusiasts will be thrilled by the LaBute New Theater Festival. There are four distinctive one-act plays being performed...Each of the plays strikes a different mood, making the entire program fascinating...Bravo to the outstanding group of playwrights, directors and the actors who bring LaBute New Theater Festival to the stage."
Read more

"The winners of this new-play festival, named for the noted playwright Neil LaBute, seem to have been chosen mostly for their LaButian characteristics, including a sour, misanthropic view of male-female relations and a taste for outrageous plot twists...There's really little of interest here as a showcase for playwrights; the 'LaBute Theater Festival' turns out to be more useful as a calling card for its talented cast."
Read more

"The first, and the cleverest, is the new LaBute work, titled 'What Happens In Vegas.' It features an excellent Clea Alsip...Almost as enjoyable is Cary Pepper's 'Mark My Worms'...Does not overextend its premise and has the sense to end while we're still caught up in the grand silliness of it all...Neither of the other two plays quite reaches the degree of sharpness in their writing or their timing...It's also a good opportunity to observe three different directing styles."
Read more

"A delightful gem and an enjoyable trifle follow two negligible works...'Homebody': In 35 minutes, Mr. McKinley delivers a very well-written, plotted and satisfying one-act play...'What Happens in Vegas': A puerile, smutty linguistic exercise that’s out of 'Oh! Calcutta!' or a 'Saturday Night Live' sketch from the 1970’s...'American Outlaws': Director Pierson’s capable staging and the pallid performances of Brown and White’s hyper acting magnify the weakness of the material."
Read more

"Told with affection by a small ensemble playing multiple roles...While the premise for each sounds intriguing, the execution lacks a certain amount of substance. The characters and the circumstances are interesting, but that’s about the extent of the depth of these pieces...I didn’t find the events particularly compelling—when I could identify the event at all...Unless you’re a big fan of Neil LaBute and his style of storytelling, the festival might leave you feeling unsatisfied."
Read more

"A rollicking evening of marvelous mayhem with surprising sardonic twists you won’t see coming until they are upon you. The evening of four one-act plays slips by quickly because of the faultless direction, clever staging, functional set design and precise timing. All combine to create a neat package of entertainment with clever undertones…Pepper’s play is pure, comical genius...I and audience members were doubled over snorting in laughter from start to finish."
Read more

"'What Happens in Vegas' is cleverly written and well realized by Kel Haney. Alsip and Hogan excel with impeccable timing and subtly expressive body language...The characters of Adam Seidel's 'American Outlaws' don't feel as fully-realized...The four one-acts form a collection that is entertaining on balance but uneven...Doesn't offer much in the way of diversity of voices. All four of the one-acts are written by white men, and the majority center on male characters."
Read more

"LaBute’s opener proves a hard act to follow. In ‘What Happens in Vegas,’ LaBute gives us a darkly funny pas de deux...There is the risk, really just a suspicion, that we are watching promising scene studies—works in development—rather than realized plays. If pressed I guess I could drum up a definitive difference. But I’m struggling with it. On the one hand ‘Vegas,’ for all its brevity, feels fully formed and completely realized, while ‘American Outlaws’ begs a good deal of indulgence."
Read more