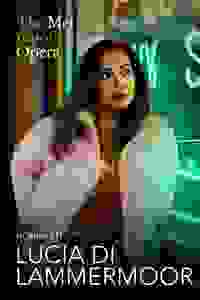 The character of Lucia has become an icon in opera and beyond, an archetype of the constrained woman asserting herself in society. The insanity that overtakes and destroys Lucia, depicted in opera’s most celebrated mad scene, has especially captured the public imagination. Originally set in Scotland, the Met’s new production sets the story in a present-day American Rust Belt, an area once prosperous but now fallen into decline and neglect.

See it if you like a good story beautifully sung (Sierra, Camarena & Rose excellent) with a powerful orchestra on an exciting set, enhanced w/video.

Don't see it if you do not like traditional operas updated or are afraid to spend 3 1/2 hours in a theater.

See it if you are willing to close your eyes and just listen to glorious singing and music. The stage direction does not really make any sense

Don't see it if you expect theater and music from the opera.There is a total lack of purpose to the staging.The idea is never realized and it becomes boring

See it if You are into beautiful music with a fantastic , talented cast. The setting is completely new and very different.

Don't see it if You are not into opera with beautiful music and great singing. Read more

Don't see it if you are a traditionalist & don’t like gritty staging. Lucia is in a crop top in a decaying Middle America town. Very long but not boring

See it if Donizetti's love tragedy beautifully sung and acted in modern dress with a gorgeous 100-piece orchestra and tour-de-force scenery appeals.

Don't see it if you prefer that your period pieces not be performed in modern dress, or if a fast 3-1/2 hours (including 2 intermissions) ain't your thing. Read more

"There is a dull emptiness at the work’s center. While scenically intriguing and superbly sung and played — with Nadine Sierra, Javier Camarena and Artur Rucinski in excellent voice, and Riccardo Frizza conducting with fluidity, briskness and grandeur — this new 'Lucia' is ultimately unaffecting and unpersuasive."
Read more

"It’s not easy to negotiate the disjunction between opera speed and Hollywood pacing. In an aria, as in real life, expressing discontent to anyone who will listen is a time-consuming business. It doesn’t jibe well with an aesthetic of quick cuts and shifting perspectives. Stone deals with the problem by having the sets go slowly spinning in overlapping orbits. He also sends the characters on long walks around the stage to distract from the fact that they keep singing at length about the same damn thing."
Read more

"The show is a feat of technical wizardry, encompassing a turntable that revolves almost constantly—during the action and while set pieces are moved on and off it—as well as a lot of live and pre-recorded video. Yet the most startling effect is how profoundly this thoughtful interpretation erases the opera’s Romantic aura and accentuates its universal despair, upending the traditional balance of tragedy elevated through beautiful sounds. Here, the singers, especially the two splendid leads, really seem to be singing for their lives."
Read more

"Some may find the entire enterprise a too demanding, distracting way to present Donizetti and Cammarano’s familiar, doomed characters, though Millennials and GenZers might welcome its multi-media approach. In any case, Stone doesn’t at all rewrite the drama"
Read more

"Although its surfaces may seem familiar at first, over the course of three meticulously modernized acts, this blighted, unidentified patch of dystopia reveals itself as a far more unforgiving landscape. It’s an amalgam of Lucia’s internal and external terrain, a hybrid of a hardscrabble life and an unruly dream."
Read more

"Met general manager Peter Gelb is smart to employ directors like Stone and Ivo van Hove, whose production of 'Don Giovanni' will debut next season. They bring a perspective that the company has ignored for too long, and they challenge notions of what classic opera should look like. But Stone’s first outing is too muddled and inconsistent to make a lasting impression. I would have preferred true unhinged madness to light shock."
Read more

"This was a production that people wanted to talk about, even with strangers. At intermission a man asked me what I thought. I said that it worked for me, but that the videos were distracting. He responded that he was a multi-media enthusiastic, so that element fascinated him, quickly adding that the entire concept would resonate with his daughter far more than a traditional staging. Undoubtedly, that’s exactly the response for which the Met was hoping."
Read more

"From the very start of the opera until the end, the audience is forced to make a very problematic choice—watch a massive movie screen hanging over the proscenium (and sometimes even on the proscenium) or watch what is happening onstage."
Read more