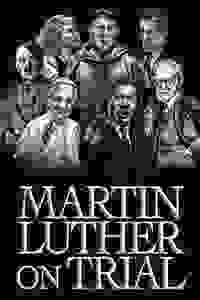 Fellowship for Performing Arts presents a return engagement of this courtroom drama, which alternates between witnesses speaking to the impact of Martin Luther's life, and scenes from the events that shaped him.

The judge is Saint Peter. And the prosecutor is the Devil. Luther’s beloved wife, Katarina, defends him as witnesses including Adolf Hitler, Sigmund Freud, Rabbi Josel, St. Paul, Martin Luther King, Jr., and Pope Francis take the stand. Even as 2017 marks 500 years since Luther ignited the Protestant Revolt against Rome, he continues to spark intense debate. The audience is the jury in this exploration of one of history’s most explosive personalities, and the religious and political controversies he unleashed.

See it if you enjoy intense verbal gymnastics, as in Stoppard's "Travesties". Clever conceit of a trial, through which Luther's flaws are understood.

Don't see it if You don't like heavy drama that demands intellectual engagement and a certain level of historical knowledge.

See it if you have a deep interest in theology, European history, Katharina or Martin Luther.

Don't see it if you don't enjoy explicitly religious or historical themes; have interest/grounding in Christianity; don't already know who Martin Luther is. Read more

See it if you like shows about historical figures in general or are interested in Martin Luther in particular.

Don't see it if you dislike shows that consist mainly of academic discourse.

See it if you like plays that deal with historic topics and you are willing to listen to every word.

Don't see it if you have a narrow mind when it comes to religion and not willing to listen to all sides of an issue.

See it if You're interested in understanding how the Protestant reformation was defended and challenged. Great acting & fabulous set.

Don't see it if You don't like heavy thinking about how we got here and what are the critical philosophically important issues surrounding us.

See it if you want to look back at the Reformation that took place almost 500 years ago and assess the similarities of a splintered society.

See it if you like a good historical drama wrapped around a trial proceeding. Martin Luther stands trial with Lucifer as the prosecuting attorney.

Don't see it if if you don't like plays based on historical events. Something that you have to pay attention to. A bit talky but worth the effort Read more

See it if you want to consider among other things whether Martin Luther fought the Catholic Church or fought God.

Don't see it if a theatre with haze and smoke makes breathing difficult.

"This drama makes up for its rough edges by being consistently imaginative, intelligent, and provocative…Director Michael Parva choreographs this complex ballet of ideas with clarity and precision. He artfully employs dimension shifts and magical special effects in a way that deepen the themes of the play…’Martin Luther on Trial' offers something that has been sorely missing from the NY theater scene for far too long: high-quality, challenging theater from a Christian perspective."
Read more

"'Martin Luther on Trial' is a fascinating investigation of the life and ideas of the founder of the Protestant Reformation. Whatever your religious beliefs, this is a balanced and theatrical representation of one of the great thinkers and shakers of Western Civilization. It is timely in that 2017 is the 500th anniversary of Luther's break from Rome."
Read more

"A most unusual and dazzling theatrical event…Part debate, theology examination, philosophical discourse, historical retrospective, 'Martin Luther on Trial' is intellectually challenging, a play for the head. The crackling dialogue is rich with sharp observations and cutting wit. The work, by Chris Cragin-Day and Max McLean, has been meticulously researched and the cast of characters reflects this."
Read more

"You might not expect a trial that entails controversial religious issues...would be as funnily histrionic as this one is. The authors make their case both amusingly and formidably with a text that is filled to the brim with witty irreverence and impassioned rhetoric...Under the direction of Michael Parva tension is built as the trial proceeds with flashbacks into Luther's turbulent life...Whatever your view, I suspect you will be enthralled as I by this damned (apology to the Devil) good show."
Read more

"The show's main problem is a side effect of its courage: It opens a door to questioning God's judgment in bringing such a man into Heaven, but then it doesn't quite walk through...When the arguments...get really heated, the play returns to the notion of salvation-just-because and lets Luther slide neatly off its hook...A bout between God and the Great Adversary can be a surprisingly watchable contest. But it loses its fun when you sense the writers throwing the game for the player they favor."
Read more

"A serious didactic work, leavened by regular doses of wit, that tackles multiple controversies in the life of the Great Reformer...The courtroom set-up certainly serves to get the competing arguments across. But, under Parva’s usually brisk direction, it can also feel schematic...The play could do with a little more compromise itself since they ultimately overestimate the dramatic power of obscure doctrinal debates...Faith alone cannot make up for such theatrical transgressions."
Read more

"The concept is enormously creative, a hyper-intellectual fantasy in the genre of Shaw’s 'Don Juan in Hell.' And it’s very well executed. It’s directed by Michael Parva, who keeps an eloquent tone to the whole thing, a sort of realism within a surreal moment...McTaggart’s performance as Martin Luther is terrific, with a strong and precise internal life...The ideological point of the whole thing is obscured by some overwriting...But 'Martin Luther on Trial' is a unique accomplishment."
Read more