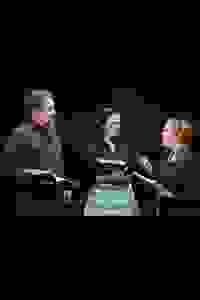 Part of the York Theatre Company's Musicals in Mufti series, this spare revival of Jerry Herman's 1961 musical centers on the romance between two Americans in Israel: a lonely widow and an unhappily married man.

Set against the backdrop of Israel's struggle for recognition as an independent nation, 'Milk and Honey' is a tale of love, optimism, and second chances. With his first Broadway score, Jerry Herman—who went on to write 'Hello Dolly,' 'Mame,' and 'La Cage aux Folles'—showed the promise of his future musical theater work. Part of the York's 'Musicals in Mufti' series spotlighting classic, underappreciated Broadway musicals. 'Mufti' means 'in everyday clothes, without all the trappings of a large production.' Each show is presented script-in-hand, with minimal staging.

See it if you're a Jerry Herman fan, have never seen this show before, enjoy humorous songs and rapturous ballads, like plots about late in life love

Don't see it if you're not a Herman fan, like to see musicals fully staged with scenery, large orchestra, costumes and dancing,

See it if you love the score. The book needs some serious updating. I'd love to see Harvey Fierstein work his magic! Voices are wonderful.

Don't see it if you are looking for an engrossing serious musical about Israel's early days. It is fun, great score, stereotyped about women. But fun

See it if you love Jerry Herman, want to see a romantic story about middle-aged people, or want to see a pack of great performers give it their best!

Don't see it if you need spectacle and bombast to enjoy a musical. This ain't it, but what it is is terrific.

Don't see it if you don't like musicals performed in a bare minimum production with no scenery, dancing or costumes and the cast holding scripts.

See it if you are a Jewish grandparent.

Don't see it if you are easily upset by old fashioned views of Israel-Palestinian relations, like a fulfilling story.

See it if you remember how good lyrics and lyrical music sound and want to hear singing unamplified. Enjoy some funny stereotypes well acted.

Don't see it if You expect a full production or perfect singing. I would have transposed some of the music into a more singable range for some principals.

See it if you want to see a rarely-performed Jerry Herman musical sung by some incredibly talented people.

Don't see it if you don't like the idea of bare-bones readings, or are put off by dated shows.

"Though time has not been kind to playwright Don Appell's book, the score is impressively varied, with hints of the classics to come...The talented company belted each moment with gusto, giving audiences a rare opportunity to get a taste of this historic show...Don't look for a Broadway revival of 'Milk and Honey' any time soon, but the York's charming production offers a fun look back at a musical theatre master's first major venture."
Read more

"'Milk and Honey' is the kind of musical that they don't write much anymore, particularly on the subject of middle-aged love. However, Michael Unger's Mufti production for the York Theatre Company gives an excellent and entertaining account of this musical which has never received a Broadway revival. Beautifully sung by leads Mark Delavan and Anne Runolfsson, they make this show seem more profound than its reputation would suggest."
Read more

"A charming love story, a rare one that involves older people who happen to be in Israel. Whether some of the 'pro-Israel' conversations have been edited, I have no idea, but the York production was as breezy and uncontroversial as 'The Music Man'...Korey as the widow Clara Weiss was terrific...She kept the audience rooting for her...Unger kept the show moving along at a relaxed pace...Saver on piano was spritely and well-paced, honoring the melodious and sophisticated score."
Read more

“Alix Korey steals the show with her hysterical delivery and comic timing. Anne Runolfsson shows star power with her perfect soprano vocals and her heartbreaking delivery. Perry Sherman has a gorgeous voice...The direction by Michael Unger was well done...The music direction by Jeffrey Saver would have been helped by a better piano…For those who love theatre and a glorious score, do not miss this production. This was definitely a show that needed a second look."
Read more

"An appealing cast does a formidable job in capturing the spirit of the show…Mark Delavan treats us with a strong voice and excellent acting in the role of Phil Arkin…The musical is enlivened by humor, much of it coming from the performance by Alix Korey as Clara Weiss…Herman wrote a tuneful score…Supporting characters also add sparkle in word and song."
Read more

"'Milk and Honey,' despite some flaws, is a real charmer...Jerry Herman’s score reveals a future master of melody at the beginning of his promising career, not to mention a deft and clever lyricist just cutting his teeth...Don Appell crafts a sweet, intimate story, even if he peppers it with just a skosh too much hoary Jewish humor than is probably wise...A major contributor to the emotional impact of the show is the cast of New York professionals."
Read more

"If you like love stories, you will love this show which has not one but four love stories as part of its plot. The songs in the show are not as well known as the songs in some of Jerry Herman's other shows, but the show does have some nice songs...The show is filled with a nice mix of sweetness and humor. Great comic relief is provided in particular by Alix Korey as Clara Weiss...Even though the show is somewhat dated, it still provides a delightfully entertaining evening."
Read more