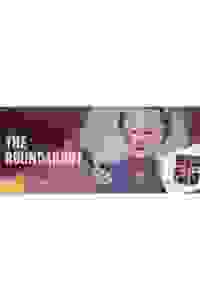 The Roundabout NYC Reviews and Tickets

Cahoots Theatre Company presents a rare revival of this comedy about England in the '30s, when it looked as if the social order might be changing. Part of 59E59's annual Brits Off Broadway festival.

The Kettlewells are a dysfunctional family. Richard is an old Etonian whose business ventures are failing. Over a crowded weekend, his daughter Pamela, whom he hardly knows, returns from Russia, a passionate communist; his ex-wife and mistress both turn up; and his butler has a big win at the races. Playwright J.B. Priestley is best known for his classic drama 'An Inspector Calls.' First staged in 1932, 'The Roundabout' is enjoying its very belated U.S. debut.

See it if you enjoy British comedies. There are laughs, but the silly plot gets tedious in Act II. JBP must have finished the script quickly.

Don't see it if you dislike uneven acting. The women are better than the men. Pamela stands out, altho her character is annoying. Chuffey has the best part.

79
Some oldies deserve to be revived, others not; this oldie but goodie does

Don't see it if a lot of overacting by stock characters to evoke laughs, predictable plotting, too restrained to be memorable farce

See it if you enjoy witty dialogue with British accent. Very developed characters, especially the daughter. Shaw would have done even more with plot.

Don't see it if don't like farce or British accents.

See it if you want to see a play that hasn't been performed since 1932.

Don't see it if you are expecting a funny, British, farce, or comedy. Read more

See it if you like terrific acting, great writing, and an interesting set. This drawing room comedy explores issues of class in a delightful way.

Don't see it if you are looking for something serious and pedantic. The acting is really top notch. Show is a lot of fun without being silly.

Don't see it if Act 2 slows as one of the main characters becomes (as described by another character) 'tiresome'. 2 fun characters in Act 1 do not appear. Read more

See it if You want to see an English drawing room comedy that touches on issues of politics and class.

Don't see it if You don't like classic well-made dramas with a generally predictable plot.

See it if You enjoy traditional play from the 1930's that are a bit farcical.

“This sparkling, impeccably staged play will be catnip to ‘Downton Abbey’ devotees, with equal doses of humor and insight...Some period conventions creak…The director, Hugh Ross, adds a soupçon of farce to the percolating proceedings, keeping his busy cast on point. Throughout, Priestley gently reminds us of the ephemerality of affluence in a teetering economy. His words, with their generous, sympathetic regard for human nature, cast a binding glow over the production.”
Read more

“A truly charming play, one that will appeal to a broad audience…Directed by Hugh Ross, the staging is superb and the show's cast shines bright in their roles…The comings and goings of these colorful characters, the clash of social classes, and the fast-paced, clever dialogue create a totally entertaining and engaging theatrical experience. You'll love the cast of 'The Roundabout.' They are funny, lively and authentic.”
Read more

“'The Roundabout' is a very mild evening of drawing-room skirmishes, the sort of thing that Coward, Maugham, and Frederick Lonsdale handled far more deftly…A few bright remarks aside, this is a strictly by-the-numbers affair: Couples are arranged and rearranged…Hugh Ross' production could use some additional layers of high-comedy style, but it gets the job done…‘The Roundabout’ will probably keep audiences amused, but it is a lesser example of its genre."
Read more

"A charming and well-performed work with an undercurrent of social criticism...A well-oiled ensemble, which, under Hugh Ross's direction, does a fine job of keeping the lighter-than-air domestic comedy floating stylishly and smoothly for its close to two-and-half-hour running time...While 'The Roundabout' may not exactly be a newly rediscovered treasure unearthed from the good old days, it provides enough delights to make it well worth the visit."
Read more

“While the play pretends to be making a statement about British class structure and the economic and social changes that were occurring in the 1930's, it is both very lightweight and very much a period piece of an earlier age. The repartee is good but, alas, the play is not particularly witty nor does it offer memorable one liners. From the usually brilliant J.B. Priestley we have come to expect a good deal more originality.”
Read more

“A comedic, but inconsequential, look at upper-class decadence…'The Roundabout' is played for laughs, rather than ideas… All told, 'The Roundabout' is well-acted and well-staged. I wish that were enough, but it's not. Despite the still-timely reference to sexual misconduct, the play is dated; despite some terrific one-liners, its assets are insufficient to recommend what is ultimately a stale production.”
Read more

“Unearthing old theatre gems is like digging for truffles–and British director Hugh Ross has found one…It sparkles with the wit of Wilde, the frivolity of Coward, and the saltiness of Shaw…‘The Roundabout’ holds the promise of an entertaining comedy of manners–but delivers far more…In the midst of all this frivolity, playwright Priestley offers a sharp, satirical bird's-eye view of an anxious era when England’s social order is changing and facing growing threats from abroad.”
Read more

"Incessant flippant chatter is crisply deployed along with archaic social commentary...Going along with the presumption that pretentiously affected acting comes with the territory and with this import, credit is due to the cast and to Ross who has affably and effectively abetted...Notwithstanding the play's relative insignificance, it actually makes a slight and snippy jab at a world of disengaged gentry...A play that is, if nothing less or more, appropriately named."
Read more