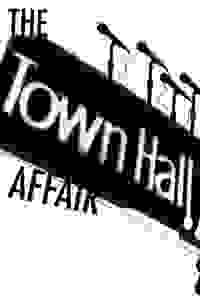 Maura Tierney ('ER,' 'The Affair') stars in the Wooster Group's exploration of the revolutionary fervor of feminist thinking and art “happenings” in 1970s New York City.

This new experimental piece is inspired by DA Pennabaker and Chris Hegedus' film 'Town Bloody Hall,' which documented a panel held at Town Hall in 1971. The event featured feminist thinkers and activists–including Jacqueline Ceballos, Germaine Greer, Jill Johnston, and Diana Trilling–with Norman Mailer serving as moderator. The Wooster Group both re-inhabits the original film and derails it, redirecting Mailer's pugnacious propensities onto himself and spinning out into Jill Johnston's vision of a revolutionary future.

See it if you have nothing better to do and have any interest in feminism in the 1970's.

Don't see it if you can see the film "Town Bloody Hall" which runs through the show.

See it if you enjoy avant-garde theatre with heavy multimedia components.

Don't see it if You require realism, or a straightforward plot to latch onto. Read more

See it if You're a Pennebaker acolyte or you miss when New York still had enough intellectuals to rub together in a public forum.

Don't see it if Mailer and feminists sparring doesn't do it for you.

See it if Really enjoyed this more than I was expecting. Consistently puts you off guard, animates & deflates an overpuffed feeling of masculinity.

Don't see it if Short and maybe a bit slighter than it could be, but still packs a wallop.

Sister of My Sister
64 Reviews | 47 Followers

See it if you are a feminist -- of any kind. Wooster Group kick-in-the-balls to Trump misogyny.

Don't see it if you're humorless and a Norman Mailer superfan.

See it if you tend to like shows that are outside of the typical "Broadway" cannon. Interesting use of mixed media in this performance.

Don't see it if you aren't willing to try to understand experimental and/or avant-garde performance styles. I found this show to be confusing and aimless.

See it if you are a fan of The Wooster Group.

Don't see it if you are looking for something beyond mimesis.

See it if you want to learn more about the people being depicted in the show. It is not a traditional play.

Don't see it if I don't recommend it. But if you do go, it is short. Just an out an hour! Read more

"A very timely and time-bending new mixed-media piece that’s churning up decades of sexual discontent...Like most of what the Wooster Group does, this is also juicy, visceral theater, translating outlandish concepts with highly disciplined technique. The synchronicity with which the cast members say what their alter egos onscreen are saying is a jaw-dropping marvel. So is the sudden, subversive techno-layering of voices, so you’re not sure where the sound is coming from."
Read more

"The show is a delight, a surprising leap into sweetness and reverence and nostalgia from a group known for a combative attitude...45 years have passed, and the conversation about feminism is somehow still ugly. But back then, there seemed to be some relish to be found in the battle. You leave the Wooster's latest deconstruction convinced that you can always fight and laugh at the same time. Somehow after all the show's knock-out blows, you leave feeling lighter on your feet."
Read more

"It nevertheless requires of its audience a certain tolerance for randomness, and a willingness to tarry and teeter at the point where pretension threatens to tip into obscurantism...LeCompte and company treat the underlying material as a two-dimensional armature on which to build a three-dimensional sculpture...Despite the superb work of the actors the added material mostly detracts...The editing of the underlying debate material actually flattens what it means to enhance."
Read more

"For all the theatrical ingenuity and excellent acting on display, the piece feels like little more than a clever technical exercise. Other than confirming Mailer’s macho bellicosity, the reenactments of scenes from 'Maidstone' add flashiness but little context to the proceedings. Ultimately, the main takeaway from 'The Town Hall Affair' is an intense desire to watch, in its entirety, the historical film that provided its inspiration."
Read more

"The cast recreates scenes from the documentary as their dialogue seamlessly syncs with the film footage displayed on screens around the stage. And the sense of déjà vu is inescapable...To say much more about the play’s unconventional approach might give too much away. Though the subject matter is often infuriating, the performances are engaging and the presentation is fascinating. A challenging but accessible downtown theater experience, this 'Affair' is one to remember."
Read more

"An intriguing docu-theatre piece…Kate Valk gives a very funny performance as the rebelliously spaced out Johnston…Maura Tierney sports a Sunny accent and an amused demeanor as Greer…Those seeking clarity can watch the full length film. The Wooster Group's appealing production is better suited for those who, like Jill Johnston, prefer to space out a bit and maybe make out with a random stranger or two."
Read more

"A cerebral outing full of wild and witty verbal sparring between the panelists that can get downright chaotic at times...The presentation is seamlessly orchestrated. Although it draws on fragments from film, literary texts, the media, and real life, everything coalesces into a dramatic whole...Of course, the real muscle of 'The Town Hall Affair' is flexed by the ensemble members...If you feel like experiencing something theatrically different, this is a real eye-opener."
Read more

"Valk is a wonderful Jill Johnston: flighty of voice, mischievous in intent, and strangely childlike when Mailer tries to cut her off…The company has not simply produced a piece of tub-thumping feminism, positing Mailer as a sexist jerk to be mocked and condemned. Instead, the Wooster Group cleverly blurs the already blurred lines of that night to tell us something new about fractious masculinity and fractious early modern feminism."
Read more