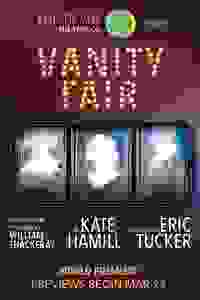 The Pearl Theatre Company presents a new stage adaptation of William Thackeray’s classic 19th-century novel, which exposes a society that cares more for good birth and good manners than skill.

Becky Sharp, poor, plain, and devilishly clever, is determined to defy the odds through risky romantic entanglements, shady business practices, and social climbing at any cost. She won’t stop until the world lies at her feet. Adapted by and starring Kate Hamill, who wrote and performed in the award-winning 'Sense & Sensibility.'

See it if you like innovative staging, altho sometimes it's disruptive. The story is well-told w/rare lags. The moral: we often want the wrong thing.

See it if you like reinterpretation of classics. Funny and fun, quirky and very creative. Hamill has managed to include comedy, pathos and heart.

Don't see it if You want classic theater. Some acting is uneven but others more than make up for it. Can get confusing at points but clarifies soon after. Read more

"Ms. Hamill and Mr. Tucker’s 'Vanity Fair' is a breathless thing and often too hectic. But this show is a gift to actors and a goody bag for its audience...Mr. Tucker encourages the actors to indulge themselves. But they’re having such a high old time that their pleasure is infectious. Less successful are the direct-address monologues Ms. Hamill has interpolated, which state themes too baldly, and dance sequences set to the likes of 'Thriller,' which blare the play’s contemporary bona fides."
Read more

“Ms. Hamill’s ‘Vanity Fair,’ which is being performed to coruscatingly brilliant effect by the Pearl Theatre Company, is a masterpiece of creative compression that is at once arrestingly original and faithful to its source material…The quick-change shape-shifting of the cast, the outrageous physical comedy of the staging, the startlingly witty use of props: All are Mr. Tucker’s now-familiar trademarks, and all add immeasurably to the show’s impact...Really ought to transfer to Broadway.”
Read more

"Thackeray's delicious wit and satirical side-winks often get lost in this ambitious, sometimes unfocused translation...More straightforward storytelling might have better served this almost three-hour-long production. The actors never fail to impress as they race about the stage and deliver some truly inspired moments...But more often than not, the hit-and-miss jokes let the air out of this colorful balloon of a show, and the second act becomes downright dour."
Read more

"'Vanity Fair' has a little bit of everything to make it one of the most intriguing adaptations of a novel I have ever seen...Becky is such a fascinating character, and watching Kate Hamill in this role was such a pleasure...That is not to undermine the extremely talented cast that joins her in the telling of this story: individuals that each play a myriad of interesting characters with such vigor and conviction, they make it look easy."
Read more

"Hamill has performed a highly efficient act of distillation, exposing the solid structure underlying Thackeray's sprawling satire...Aided by a nimble company of seven, Hamill and Tucker roll out scene after scene right out of a satiric engraving in Punch...I hasten to add that Tucker, who never can let well enough alone, does from time to time indulge himself...These moments are soon over...This production never lets us forget that Thackeray's satire routinely cuts too close for comfort."
Read more

“Thackeray's 784-page novel on love, money and social climbing has been adapted into a concise and cogent stage play by Kate Hamill, who has also given herself a magnificent role as she previously did in her Jane Austen adaptation. Director Eric Tucker has obtained the most out of his accomplished and skillful cast. This ‘Vanity Fair’ is a TKO putting a seemingly huge and unadaptable 19th-century novel front and center on the stage of the Pearl Theatre. Thackeray would be pleased.”
Read more

“Hilarious…The ensemble cast is uniformly excellent. The male actors skillfully play multiple roles…Hamill is pitch-perfect as the feisty and flinty heroine…As a writer, Hamill has made some inspired changes to Thackeray’s novel…'Vanity Fair' isn't perfect. I could have done with less of the passing gas humor, done as a group effort—but it got laughs, so what do I know…But these are minor quibbles…A fresh, fast-paced, and wildly entertaining take.”
Read more

"Great and glorious, equal parts cabaret, circus and non-judgmental morality play...Go see the play. It’s fun, interesting and often even touching...Kate Hamill, the adapter and star, and Eric Tucker, the director, are a smashing duo, as in turning classic stories into theatrical smash hits...I thought the second act could have been cut slightly. As for Eric Tucker’s direction, triple wows for turning an ancient classic into a fun show with a considerable undercoating of content."
Read more

"Even with an ideal space for Bedlam's style of classic adaptions and scenic designer Sandra Goldmark on board to support Eric Tucker's directorial vision, wrestling Thackeray's epic character and plot-stuffed novel into a manageable stage work is a daunting undertaking...This production will be richest for those who are familiar with the novel...Tucker helps make the character and scene shifts seem effortless...But it's hardly enough time to do justice to this doorstop-sized classic."
Read more

"Ms. Hamill’s play gives us a vivid, panoramic satire of English men and women striving to rise through marriage or inheritance...The production is imaginatively staged...Ms. Hamill, in addition to being a terrific adaptor of text for the stage, is also an actress of great strength and charm...The entire acting company deserves high praise for creating engaging, often deeply humorous, compelling characters."
Read more

"A clever and creative adaptation...It’s a stellar reframing of a puppet play for a modern audience who may be bored by the straightforward historical approach to such classics, and need a little Bedlam in their drama. Emotionally it’s a bit distant, but it makes up for that with frivolity and fun...A smart and excellent portrayal by Hamill full of slyness, wit, and style."
Read more

“This is theatre having fun with itself as a game people play, using familiar props in unfamiliar ways, and openly sharing its performance with the audience...This works in limited amounts but...it becomes a self-defeating device that deflates interest in the material it's meant to serve...The cast...shows good humor, versatility, and intelligence but the demands of making their characters engagingly real while also subjecting them to so many audience-distancing japeries proves insuperable.”
Read more

"An eye-catching, attention-grabbing show that, although too long, lives up to Hamill’s conception with effectiveness. The trade-off is that while one can admire the acting, the costumes, the effects and the overall impact, this is not an approach that can engender very deep pro and con feelings for the characters, who mostly one-dimensionally play out their respective lives...My greatest pleasure was watching Hamill make the most of her role as Becky. She is exceptionally talented."
Read more

“Clamorous incomprehension...Some of the actors play it straight, others are so over-the-top one winces at every appearance…Direction is as uneven as acting. It’s as if the production can’t make up its mind…Hamill creates a Becky Sharp with less grace, charm or seductive attributes–virtually everything that enabled the character to rise–than insistence…The play is periodically entertaining, but chaotic (not freewheeling) in a style I find too often self-defeating.”
Read more

"Hamill had a remarkable and deserved success adapting 'Sense and Sensibility' and she’s done it again here...The direction, the acting, the tech elements all work in concert but above all it’s the canny script of Hamill that shines. She captures the sweep of the novel and its many ideas with spot-on choices...If the evening is more intellectually stimulating than emotionally gripping, ultimately that’s due to the limitations of what Thackeray created in his Punch & Judy of a morality tale."
Read more

“The Pearl’s seven-member cast is a well-oiled ensemble…All the actors are adept at transforming themselves…The principal weakness of this 'Vanity Fair' is its stylistic indecisiveness…Hamill and Tucker have invested this 'Vanity Fair' with theatrical gusto, a sense of contemporary relevance, and a full measure of merriment. If 21st-century irony, the prevailing voice of Bedlam, drowns out Thackeray’s dryly satiric take on Regency England, that’s unlikely to matter to most playgoers.”
Read more

"Hamill takes a decidedly feminist approach to 'Vanity Fair,' which is particularly fitting in the wake of Hillary Clinton’s loss...Hamill has streamlined Thackeray’s novel into a treatise on judging morality, no matter the era. She plays Becky as a strong-minded 'Nasty Woman' who believes she is capable of anything. Parsons is terrific as the demure Emmy...The five other actors all expertly play multiple roles, both male and female, blurring gender lines while also making fun of them."
Read more

"Ms. Hamill, among Off-Broadway’s most intelligent young playwrights, and Mr. Tucker, among its most inventive directors, team up again, distilling Thackeray’s novel to vivid, contemporary expression...An exemplar of making the literary theatrical. I’ll go even further and declare that 'Vanity Fair' is what theatre is all about, even if, at every turn, Hamill, Tucker and company are asking—so entertainingly, so disarmingly—'Who are YOU to judge?'"
Read more

“The satirical tone of the story can wear thin...Yes, it’s imaginative—just getting seven people to play 20 or 25 or 30 roles requires heroic imagination and energy, and Kate Hamill, the author and star, and Eric Tucker, the director, are nothing if not imaginative. But there’s something amiss…This work curdles more than charms...It’s ambitious, very ambitious. But it doesn’t live up to its ambitions."
Read more

“A marvelous production…Except for the two women, the rest of the wildly accomplished cast play multiple roles. They all shift from character to character and gender to gender, with high-precision timing…Directed by Eric Tucker with a featherlight touch and a lively tempo, it becomes all the more remarkable that we are, from time to time, caught up in the plot, moved by events, worried about the characters’ fortunes, and eager to know what happens next.”
Read more

"As much as the production attempts to energize itself with movement, it fails to do so...Ironically, despite its best efforts, the play drags at moments, and part of the fault lies in the writing of the play itself. Hamill's adaptation is unfortunately overwritten...The main problem in this adaptation: the amount of time it spends telling its audience what to and what not to think of its characters...Despite the script's problems, Hamill is still a delight to watch as Becky Sharpe.":
Read more

"It’s a terrific production, altogether satisfying...Eric Tucker directs with enormous precision and humor. The stage is constantly animated. The pace never flags and we never weary of these 19th-century characters who behave so badly and are so like us...There are moments when the playwright throws rather too much at us at once, and we’re confused. But The Pearl Theatre Company has mounted a great success."
Read more