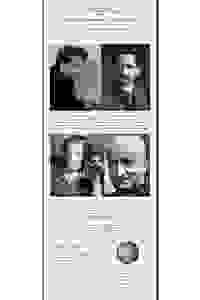 This world premiere dramatizes the relationship between two leading intellectuals of the twentieth century: Hannah Arendt, a Zionist, and Martin Heidegger, who became an ardent Nazi.

Hannah Arendt was a brilliant political theorist and a philosophical thinker of the first rank. As a teenager, she commenced an affair with Martin Heidegger, a celebrated German philosopher who went on to become a leading and unapologetic supporter of Adolf Hitler. After World War II, Arendt maintained her friendship with Heidegger, met with him and corresponded with him, despite Heidegger’s silent refusal to disavow the Nazi party. The play explores how this could have happened, by probing into the Arendt/Heidegger affair.

See it if you know or want to begin to know the two principals and their interaction over five decades in a multi-scene production, well-staged & lit.

Don't see it if ou are not interested in philosophy, the German-Jewish struggles pre and post WWII or do not like long plays with over 20 scene changes.

See it if you are interested in totalitarianism & how it breeds cowards, or in philosophy, Nazism or the response of German Jews to the 3rd Reich.

Don't see it if you are not prepared to sit still while philosophy is argued. Read more

See it if You have a strong background in the history of all parties. If not you learn only the barest skeleton of the story.

Don't see it if You want sophistication, subtlety or naturalistic acting. Or perhaps this is too subtle. What kept these philosophers in thrall.

See it if A beautifully written story involving historical figures who were intellectual educators during WW2. Well acted.

Don't see it if If you perfer light dramas or musicals.

See it if you'd enjoy a based-on-true-life drama re: WWII, history, philosophy, featuring a very small (clipped) glimpse into the "A-H" relationship.

Don't see it if you can't sit thru a LONG show w/TONS of scene changes. Except for the beautiful pics (video-projection), this one's a big mental exercise. Read more

See it if you'd like decent acting and an interesting take on troubling relations of Arendt and Heidegger. Author blames H's wife for his Jew-hatred.

Don't see it if You'd rather avoid yet another WWII story, albeit one on a philosophical plain. Also, acting is a little too cold for such an ardent affair. Read more

See it if you like philosophy, autobiographical stories of historical figures, history and great acting. All actors are phenomenal!

Don't see it if you only like big-stage productions, are not interested in history and the life of 2 of the most important philosophers of the 20th century. Read more

See it if the political chaos in our country has you seeking a voice of reason. The portrait of Hannah Arendt here is periodically arresting.

Don't see it if you'd like to see Heidegger truly confronted for his anti-Semitism. The playwright pulls a lot punches (and places too much blame on Mrs. H) Read more

"Author Douglas Lackey and director Alexander Harrington have managed to extract a thought-provoking stimulating performance from two of the most controversial public intellects of the twentieth century...Their conflict is presented through an exhilarating poignant dialogue...Simon and Stuyck are a superb pair, attuned to each other, finding the nuances, and portraying in subtle ways the impact on their relationship that their external reality imposes.”
Read more

"Neither Arendt nor Heidegger seem capable of loving passion in Lackey's new play...The romance between Arendt, played with often sympathetic political nagging by Simon, and Heidegger could have been a good platform for explaining Nazism and its educated supporters...Stabs are made at comparing our present gross Trumpism to the pre-Nazi Weimar world...’Arendt – Heidegger’ may be one of the historical signposts to which we might pay some attention.”
Read more

“This is the story of a woman in love, no ordinary woman and no ordinary affair’...This play is mesmerizing in its many now-familiar aspects...The casting is perfect, making the story ever so plausible.”
Read more

“A niche play for an intellectual audience that is aware of Hannah Arendt, if not Martin Heidegger, as well as a play for those philosophy-loving newbie’s with an intellectual bent...Breathing life into this production is the masterful melding, under the deft hand of director Alexander Harrington, of the actors and technical crew...While all of the actors were simply wonderful, it was Simon’s uncanny channeling of Arendt that kidnapped the entire audience."
Read more

"At the core of 'Arendt/Heidegger: A Love Story,' a new play by Douglas Lackey, is the intellectual, emotional, and romantic relationship between two of the leading intellectuals of the 20th century...In this well staged and acted drama, directed by Alexander Harrington, Hannah and her married 35-year-old professor enter into a romantic relationship...The play closes with a powerful final encounter between Hannah and Martin in the dining room of a Freiberg hotel in 1964."
Read more