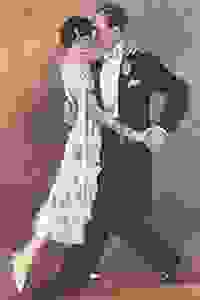 Musicals Tonight! revives George and Ira Gershwin's 1927 musical comedy. Note: The plot is totally different from the 1957 movie musical of the same name.

Jimmy Reeve is the legal guardian of three pretty sisters: Dora, June, and Frankie. He keeps their prized possessions in his safe, including June's pearl necklace and Frankie's diary. Since the diary contains incriminating information about Frankie, he convinces aviator Peter to steal it. But somehow, Peter manages to take the pearls instead, setting off a merry chase. To complicate matters, two bumbling burglars, Herbert and Dugsie, get swept up in the criminal chaos. Filled with classic Gershwin tunes including "'S Wonderful," "He Loves and She Loves," "My One and Only," and the title song.

See it if you want to hear some great Gershwin tunes and lyrics. The script is silly, but the songs are s'wonderful. The small stage is well used.

Don't see it if you require all-round top performers. The women are generally much stronger than the men. Still, you get a lot for your entertainment buck. Read more

See it if You love Gershwin! This is filled with favorites! Earnest young cast, with extremely talented supporting actors. Sweet period piece.

Don't see it if you don't like an intimate house played like it was a 2000 seat theatre by the female lead. Way too much mugging! Nevertheless, great music! Read more

See it if you need an antidote to debates, if you love Gershwin, if you want to see how much magic can be wrought on a tiny stage with talented folks.

Don't see it if The charm and simplicity of old musicals completely eludes you, or if helicopters, falling chandeliers or bad language are necessary. Read more

See it if Kudos to "Musicals Tonight" for this superb, delightful musical revival. Cast is bursting with talent & enthusiasm - great singing & dancing

Don't see it if You need a full blown set & effects; there are none, tho costumes are great. This is theatre on a shoestring budget, but oh how it shines!

Don't see it if If you hate 90 year old musicals

See it if You want to hear a charming score by the Gershwins, combined with some of the best dancing you're likely to get off-Bway. It's a good time.

Don't see it if You haven't the patience for old-timey musicals - the story is nothing you haven't seen before, a very standard musical rom-com. Read more

See it if you like shows that feature songs and dances of the 1920s and musicals that are a little sappy but fun.

Don't see it if you are expecting to see a re-creation of the movie. They are not related except for a few songs.

See it if If you like shows from that era that are just cute, fun, dancey entertainment with a great cast.

Don't see it if If you want a deep plot or a real masterful work of theatre.

“‘Funny Face’ for Musicals Tonight! is everything one could have wished in a 1920’s musical comedy revival. While the show’s book requires a good deal of suspension of disbelief, it goes with the territory of early musical comedies, but allows for the memorable Gershwin score. This is a terrific example of the musicals intended for the tired businessman back in the Roaring Twenties. The uncredited glamourous costumes also give the show a very smart, chic period look.”
Read more

"Producer and creator of Musicals Tonight!, Mel Miller, and his cohorts have put together a buoyant version of the piece helmed by director/choreographer Casey Colgan of whom I am now a serious fan...With this production, the organization has reached a new high...Everyone is cute without being saccharine. This is a cohesive company accurately representing a period show while having an infectiously good time."
Read more