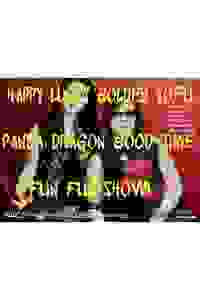 The coolest Asians you know, who brought you cult hit Kate’s Chink-O-Rama:featuring the Chinkorama dancers” & the Smithsonian show "Birth of a nASIAN" & the band Slanty Eyed Mama are coming to the New York International Fringe Festival!!

This show features songs like “MODEL MINORITY”, “WHITE GIRL PROBLEMS”, “BOWL CUT BLUES” and “THE HELLO KITTY SONG”. Their previous comedy music show “Birth of a nASIAN” was invited to the Smithsonian Institute and shot for Comedy Central’s online portal. They have been seen on PBS, Comedy Central, Pacific Time TV, LA Grand Performances and now in the movie version of Happy Lucky Golden Tofu Panda Dragon Good Time Fun Fun Show is on the festival circuit in 2016 for general release in 2017.

“A Bold, daring fun crazy voice that expresses our joy our rage our piece of the American Dream” --East West Woman

Don't see it if you are tired of as-am issues w/comedy. Trust me, as asian I've seen so much it can get overdone even for me. No groundbreaking moments here

See it if Open to new things and enjoy a change.

Don't see it if You want the same old same old. It is different!

See it if you like provocative comedy about race / spoken word. They do comedy songs and stand up and it's pretty unusual. The violin was amazing!

Don't see it if you don't like dirty jokes or spoken word things. It's pretty out there (in a good way) A good late night show.

See it if It’s on sale and on CNY

Don't see it if Long

See it if you like your rock and stand-up with a strong dash of feminist Asian POV, you enjoy politically pointed cabaret in a variety of forms

Don't see it if you can't stand loud music [pity!] or you don't want to buy a drink and join the festivities.

See it if You'd like to check out comedy stand-up and songs that both provide laughs and make a point about the Asian experience.

Don't see it if You don't like funny shows that help open your eyes about the U.S. Asian experience.

See it if you love intelligent creative humor

Don't see it if you are conservative or stodgy

"Provocative both in band name and show material, Rigg and Hung head an hour and twenty minutes of hilarious characters, stand-up comedy, video installations, and musical numbers that all deal with conceptions of 'Asian-ness' in the United States...It’s not superfluous or flashy for the sake of flash. What Rigg and Hung are getting at here is something much more meaningful than a few laughs at an imitation voice of an old Asian woman."
Read more

"This show is effortlessly entertaining. Rigg provides an evening of crude humor, stereotypes, and uproariously comical songs with Hung on electric violin. Though the curation of the evening may not flow perfectly from point A to point B, the fun is at a high throughout. And that's why we're there…In the end, 'Happy Lucky Golden Tofu Panda Dragon Good Time Fun Fun Show' is pure enjoyment performed by veteran performers. It's guaranteed to make you laugh."
Read more

"There’s an embarrassment of riches in her (and collaborator Leah Ryan’s) dissection of our modern world—if anything, a show overstuffed with brilliant wordplay would be even stronger with some pruning that allowed its moments of emotional impact more air to buoy the heady ride. Clever songs and incisive commentary showcase Rigg’s lightning-fast intellect; still, it’s the poignant turns with characters yearning for a foothold in a world that has no place for them that linger, move and sting."
Read more