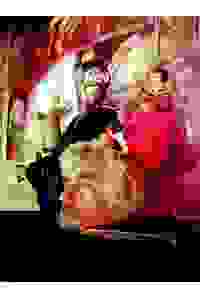 In Czechoslovak-American Marionette Theatre's production, the story of Johannes Faust, who sold his soul to the devil for ultimate knowledge, is staged with age-old technical tricks of Czech puppetry.

A classic of the Czech marionette repertoire, the play traditionally contains satirical pokes at contemporary authority figures, such as a king, a congressman, or a local mayor. The company’s adaptation was initially developed in 1990 and its topical references are updated to the current topsy-turvy political climate.

See it if you have not seen traditional puppet theater with political commentary and live music.

Don't see it if you dislike slapstick, puns and other low forms of humor.

See it if you are interested in puppets or in versions of the Faust(us) story.

Don't see it if you think puppets are for kids. Read more

See it if you love marionettes.

Don't see it if comfortable seats matter to you. Read more

See it if You're a hardcore puppet person.I have to confess, I'm not into puppets but I thought these would be special. They weren't particularly.

Don't see it if You want the Faust story.A lot of slapstick that grew old pretty fast.I think I had a nightmare about the really clownish puppet. Too long!

See it if You like puppets and accordion music. Cleverly staged.

Don't see it if You need a clear, linear plot. This generally follows the Faust storyline, but regularly veers off to modern jokes and irrelevant scenes. Read more

See it if you like puppetry, the classic tale of Faust, enjoy historical theater artifacts, and old styles of presentation.

Don't see it if you mind bad sound and dialogue that is difficult to understand. Jokes that don't land (maybe sound) which is essential for puppets.

"Brief but entertaining production...The black-box space downstairs at TNC has the perfect atmosphere for CMT's old time puppet theater...We all had a 'happy good night'—and the moral of the tale? Let each one ruminate on how the devil will get his due (or not)."
Read more