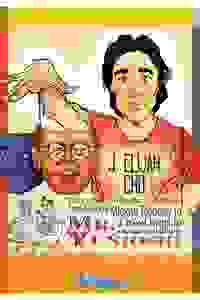 Part of FringeNYC: Mickey Rooney's yellowface performance in Breakfast at Tiffany's is infamous for its lack of cultural sensitivity. But was there ever a way he could have pulled it off? An Asian actor tries to find out in this one man show.

FROM THE ARTIST:
Some Sort of Show is proud to present Mr. Yunioshi as part of the 20th annual New York International Fringe Festival - FringeNYC. Written and starring J. Elijah Cho. Directed by Jack Holloway and stage managed by Matthew Ray. Produced by Scott Waltz.

Mr. Yunioshi is a solo performance piece that follows a fictional Mickey Rooney as he attempts to create his character for Breakfast at Tiffany’s. This comedic show aims to explore the controversial topics of yellowface and "colorblind" casting.

Writer and actor J. Elijah Cho (Mickey Rooney) can be seen this Fall in the third season of AMC’s Halt & Catch Fire, reprising his Season Two role as Mutiny coder, "Wonderboy." He's an accomplished stage actor and has an XBOX Gamerscore nearing 200,000.

Some Sort of Show was created in the summer of 2010 by J. Elijah Cho, Trevor Seits, and Scott Waltz. The goal was to provide Tampa-based writers, performers, and artists with an environment where they could create some sort of show for local audiences.

See it if you saw Breakfast at Tiffany's and were dismayed by the racist portrayal of someone Japanese by Mickey Rooney.

Don't see it if Ah, it will all be explained. You'll like it.

See it if you like solid, funny solo shows and thinking about diversity in entertainment. Good acting, thoughtful, totally enjoyable.

Don't see it if you don't like solo shows?

See it if you care about racial considerations in theater and film casting. And if you haven't thought about such things, you should. So see the show.

Don't see it if you like mindless drivel that offers no deeper message.

Don't see it if you don't like solo shows/audience interaction.

See it if you want an hour to unsettle racial categories and enjoy deep, ironic storytelling

Don't see it if you want something that does not sit on the fringe. also, there's a bit of speechgiving.

See it if you're a great fan of Breakfast at Tiffany's, but embarrassed by this show's title character.

See it if you are interested in intelligent, witty writing & a comedian with impeccable sense of timing. Great message without the didactic lecture

Don't see it if you have never heard of Mickey Rooney, are not interested in film & do not know that there are different cultures under the "Asian" umbrella

"Holloway keeps the set and staging simple, letting the words take center stage. And Cho does a terrific job, ending on a high, comical note, and showing us that while our society has come a long way, it hasn’t come far enough. It’s a very cunning and subtle show, at times almost too clever for it’s own good; I worry some may miss the satire. That said, the world obviously needs more inclusive casting, more A-List Asian actors, and it certainly needs more Cho."
Read more

"A big part of the theatricality is, of course, watching an Asian man portray a white man struggling to come across as Asian...It's funny yet painful when this Asian actor dons the movie costume of a robe, glasses with stereotypical Jap round black frames, and two cartoon-like oversized front teeth. He succeeds in letting us know that this kind of casting is ugly and out of date, and the total transition to a more evolved, realistic, and enlightened view of various races is still overdue."
Read more