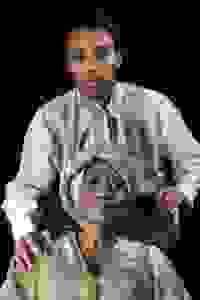 One Drop NYC Reviews and Tickets

The politics of "passing" in post-war Louisiana come to life through the story of a young man who could be held back by hate, but is led forward by love.

Inspired by the playwright's actual family history, 'One Drop' tells the story of a family torn apart by racism but ultimately reunited. Born out of wedlock to a white woman and a Black man in 1876, the play's central character, Charley Cade, is exiled from his biological mother's plantation home before he was even born. Raised by an adoptive Black mother, adolescent Charley inherits the task of "passing" for white because of his light skin. But to whom is Charley loyal? His adoptive mother, LaTessa, who withheld knowledge of Charley's biological past for his life's sake, and who represents to him the Black community that nurtured him? Or to his white peers, to whom "one drop" of non-white blood is enough to justify murdering him?

See it if you are interested in the history of race -- & mixed race -- in the US.

Don't see it if you have little patience for cliche, or dull theater. Read more

Don't see it if you need a show with more distance between the author and the subject and that has seen a good editor's knife.

See it if you want to see a play with many ideas that goes nowhere. The actors, mostly amateurs, can barely be heard or understood most of the time.

Don't see it if you're looking for an equal to the great play "the Octoroon", which about the same subject.

See it if You want to see a play that depicts a real life story of a young man of mixed race searching for his identity.

Don't see it if You want a polished play with a better edited script. Read more

See it if You are interested in a facet of history.

Don't see it if You are not interested in historical information.

See it if You enjoy shows based on real life experiences.

Don't see it if you do not want to travel downtown to a theater on First Avenue.

See it if the concept and the attempt to present it for an audience is enough for you or if the story strikes a chord, live band was a great addition

Don't see it if if poor accents and poor sound quality annoy you stay away. If you expect the whole cast rather than only 1 or 2 to perform up to par. Read more

See it if you like stories about race. The live band was great.

Don't see it if While a great story and concept I don't think it was properly executed. Unnecessary singing and slow at times.

"The play is structured like an epic folk tale and enriched with original music...Fulton brings to the stage several familiar tropes from 19th century Southern plantation life—some a bit too romantic, some with a 20th century perspective...Within those tropes, however, Ms. Fulton embeds the American racial malaise at the core of its racially mixed history. This is what drives the dramatic energy of the play...Come to the play and you will clap to a hopeful vision."
Read more