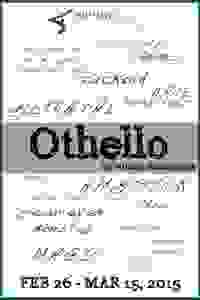 This adaptation of Othello, was staged in modern dress, with a focus on the language of Shakespeare’s original work.

After Othello, a black Arab, is made General and appointed leader of a wartime military operation, he chooses a scholar as his lieutenant and marries a powerful senator's daughter without his consent. Sick of being passed over, Othello's closest friend and best soldier uses his influence to make a deadly point.

See it if If you like the Bard, truly one of his best.

Don't see it if It is a very long show. Shakespeare in modern dress. If you don't like classic theater or the Bard.

See it if This production of the classic limns man's jealousy, venality and utter fallibility, offers terrific acting and staging as well as the...

Don't see it if ...ability to make the veteran language easy to hear and process -it's never archaic, rather thrilling as it serves up our weaknesses. Bravo

Don't see it if cant think of a reason.

Don't see it if you want to see Shakespeare in a traditional manner. You don't want to see frightening parallels w/ Othello and current politics.

See it if You want to see first-hand how a "classic" can deliver greatness, depth and insight on a modern platform

Don't see it if you aren't ready to settle in for a 3.5-hour examination of human nature and its consequential tragedy. Or if you're a superficial patriot.

See it if you like Shakespeare and tales of tragedy and woe.

Don't see it if you don't like Shakespeare. But it's one of his best pieces ever made, and I've never seen a bad production.

See it if I tried to go again, because I don't expect another Othello of this caliber. Creative and devastating...all bard-lovers should not miss.

Don't see it if You can't sit on a cushioned bench for a long time, or if you're not into Shkspre, who is truly not for all...but this is as good as it gets