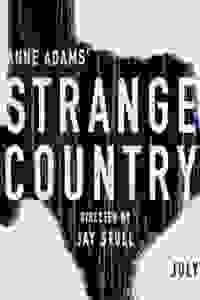 Tiffany has been there for brother Darryl every step of the way since his release from the psych ward. But when she brings her girlfriend Jamie home for the weekend, Tiffany finds herself in a fight she didn’t see coming. With the fireworks of family and pride and independence at stake, 'Strange Country' plunges into the thick of the Texas heat and how far we are willing to go to win. Anne Adams' play is the inaugural recipient of NLTP's 'New Light New Voices - 2016.'

See it if The best off/off-off of the summer. Riveting. Realistic characters & behaviors . Roundabout needs to grab this one quick. Needs no changes

Don't see it if Issues of untreated addiction & mental weakness disturb you or hit too close to home. This is powerful/uncomfortable but also funny.

Don't see it if Can't give this show enough praise! Excellent on all levels and ready for a larger venue! Go see this production!

"Anne Adams’ emotionally raw, earthy and often very funny contemporary dysfunctional family drama. This entertaining piece of Americana has the humanity of Lanford Wilson, the quirkiness of Beth Henley and the unruliness of Sam Shepard…In 90 well–crafted minutes, Ms. Adams affectionately renders her trio of interconnected lost souls’ plights with biting humor, and intense revelations with a number of plot twists. Everything leads to a moving, realistic and satisfying conclusion."
Read more

“Taut dialogue, more than a few one-line zingers, and unpredictable twists keep this from being a run-of-the-mill play about family dysfunction. What’s more, the chemistry between the three characters is pitch-perfect. Even more striking, Jay Stull’s direction takes full advantage of the actor’s physicality, and relies upon movement and body language to convey what words do not...It’s a terrific production. It’s a terrific production. Deeply moving, fast-paced, and evocative."
Read more

"The play challenges every first impression that it gives us...The play doesn’t have a large amount of plot, preferring character development over plot development. The trio of actors take us through these transformations beautifully...The play itself creates slight issues when it comes to its characters’ motives...Where 'Strange Country' is most successful is in its refusal to offer black and white moral answers to any of the challenges that its characters face."
Read more

"Well written, well directed and well acted, but seriously who wants to sit through this?...Adams has created three complex characters but we don’t really like any of them...Stull’s direction keeps us interested and he makes us believe this tale of woe...Adams' writing is natural, though who really is your audience and who wants to see this? In all honesty, I don’t. I feel as if my soul is being stolen."
Read more

“Adams’ first play shows that she clearly knows her way around the territory’s dark alleys lined with addicts, enablers, broken families, and the mentally ill. Director Stull shapes an excellent cast into a realistic portrait quivering with Expressionistic intensity...One good definition of a successful drama is a story that acutely distills universal realities. ‘Strange Country’ gives us an uncommon triple portrait of common anguish, straight from the strange country of the human condition.”
Read more

"Three wonderful actors directed by Jay Stull have an amazing chemistry and play off each other very well. Every pause is in its place and even when we are left alone, looking at the stage that everybody left, the anticipation is charged with possibilities…Much like in life, there is no black and white, there is a constant struggle for truth and happiness, and sometimes people disagree on what is right and whether their happiness hurts other people."
Read more

"'Strange Country' does a good job of capturing the sadness that is brought on when a family member is suffering from a problem that is too difficult to fix. However, it also explores the complicated idea that what may be good for one person may not be good for another. Everyone has his own way of surviving, and the measures people use may not always be the right ones...It’s a philosophical conundrum."
Read more

"A tough but tender ninety-minute drama…Adams, a first-time playwright, has a tendency to lapse into therapeutic cliché and implausible avowals…Those late missteps detract from the otherwise sensitive treatment of the trio by both Adams and the cast of Jay Stull's slow-burn staging…Geraghty's Jamie in particular conveys a quietly shattering sense of being shell-shocked by her self-inflicted pain."
Read more