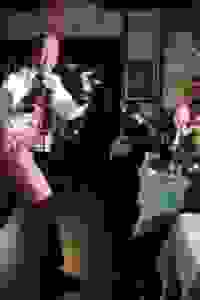 New Harlem Besame presents a solo bio-show about the life and career of Sugar Ray Robinson, aka the "King of Harlem."

Performed at the New Harlem Besame restaurant and lounge located on Sugar Ray Robinson Way, this dinner theater production is a one-man biography of the legendary boxer, who was renowned for his litheness, power, and extravagant lifestyle outside the ring. Directed by Woodie King Jr., the play celebrates Robinson's legacy. Dinner is included in the ticket price; drinks are a la carte.

See it if ewt

Don't see it if twerty

"Reginald L. Wilson exudes warmth, and that helps make a fairly good play quite a bit better...The play is primarily anecdotes and casual storytelling, and would be far less successful if done on a traditional stage...Scenes in which Robinson recalls his mother and where he remembers a conversation with Muhammad Ali are especially touching...While a tighter story line (and some nuance) would be welcome, the structure allows Mr. Wilson to hold the floor with ease."
Read more

"As directed by the Federal Theater’s Woodie King Jr., Wilson’s one-man monologue of Robinson’s life shows a different kind of superstar...Wilson portrays Robinson as a man proud of his extraordinary achievements, yet all too aware of his place in society. This illustrated the frustrating thing about Robinson’s life, and the play that depicted it...'Sugar Ray' is a collaboration between some greats of African-American culture."
Read more

"Via his outstanding talent, actor Reginald L. Wilson, brought the one-man play alive with considerable verve, wit and humor. I certainly learned more about Sugar Ray's life than I knew formerly, and what an interesting life the charismatic ladies man and thrice-married boxer led. Through his performance, Wilson introduced the diners to the personalities of Joe Louis and Muhammad Ali, and the multiple individuals that Sugar Ray fought in his illustrious career."
Read more

"The play is primarily casual storytelling, recounting the boxer’s tempestuous teenage years, his womanizing, his three marriages, his major bouts, his retirement and his eventual comeback...Wilson’s 'stage' is the entire dining room. Amid the tables and aisles, he occasionally ad-libs in response to audience members, refills diners’ water glasses, and comments on the black and white fight films that are projected onto a screen...Mr. Wilson embodies Robinson admirably."
Read more