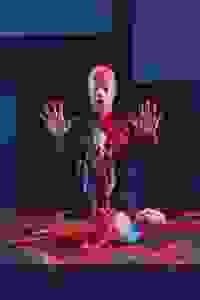 Little Shadow Productions brings back this solo puppet performance about Wylie, a contract shaman who works for NYORG—a city in the middle of a swamp.

Wylie uses his unusual talents to solve problems and do routine maintenance on the city’s interweb biotechnology. Due to the haunted land and sentient mainframes, Wylie faces many occult adversaries. Storms constantly threaten to destroy NYORG, but a secret feature of the Flatiron building keeps the storms at bay—that is as long as the cloud-code is cracked and the correct ritual procedure is followed. Inspired by speculative fiction and neo-noir, 'The Flatiron Hex' is a peek inside a parallel world infected with intelligent viruses and paranoia. Elements of the fantastic collide with the everyday to become evocative of a magical reality.

See it if Puppeteer with amazing repetoire of techniques draws us into a dystopian future NYC. Weird original characters, many hilarious moments.

See it if you appreciate skill, imagination and fun. Remarkable character puppets in a creative dystopian future. Sit close to appreciate the details.

Don't see it if you dislike puppets or intimate performance venues.

"With an awesome display of virtuosity, puppeteer extraordinaire James Godwin vividly enacts an enthralling sci-fi tale with shades of film noir...Godwin’s delightful script co-written with Tom Burnett is an affectionate and rich amalgam of old movie conventions with a cheeky spin...Precise staging exuberantly realizes the fanciful universe that is striven for...In the category of unique theatrical experience, 'The Flatiron Hex' is beyond category."
Read more

"Performed with astonishing verve by Godwin...The plot is convoluted and purposely difficult to follow as one twist follows another and intrigues pile up...The complexity of this production is mind-boggling, if drolly rough at the edges...Godwin, who designed the intricate and varied puppets and the ever-changing set, takes the breath away with his energy and skillful command of each and every aspect of the production."
Read more

"A lighthearted exploration of several potentially heavy topics...It seems confused as to what message or questions the audience is meant to take away...It touches on issues that affect us all without the discomfort of working in naturalism or a recognizable universe. Unfortunately, without employing that discomfort to parallel contemporary life, it may not arouse the conversations and question-raising among its viewers that this reviewer assumes is part of the intention."
Read more

“Deliriously weird…It’s not every solo performance that makes you wonder if the usher has slipped some psilocybin into your preshow drink…The plot makes very little sense and probably made even less than usual during that preview performance, as Mr. Godwin couldn’t stop inserting jokes and gripes about that blown bulb into nearly every scene. But in full light or half-light or no light at all, 'The Flatiron Hex' is a dauntingly original and possibly hallucinogenic delight.”
Read more

"Writing-wise 'The Flatiron Hex' drags for the first half of its 90-minute run time as the audience is still struggling to understand the world they are suddenly thrust into...However, at or around the halftime mark, the story goes utterly bananas. The play falls down a rabbit hole of insanity and keeps tumbling down until its climax; this crazed second half is what saves the show...For those with a taste for the outlandish and weird, 'The Flatiron Hex' is a humorous ride of the imagination."
Read more

“‘The Flatiron Hex’ is both charming and supremely difficult to follow. Godwin dashes around, manipulating puppets, making voices, and chomping blood capsules (this is one of the gorier puppet shows you’ll see). The convoluted story, and Godwin’s occasional aggression toward spectators, can make the piece jarring to watch. But the odd antics and the ecological vision—more prescient than it seems—save the day.”
Read more

"The futuristic puppet epic never downplays the End of Days, an annual event in NYORG, but provides it with an irresistible infusion of technology and hocus-pocus...The deadpan narration fits this crazy sci-fi perfectly…'The Flatiron Hex ' has a lot of the familiar, but is ultimately something utterly original and silly. "
Read more

“'Flatiron Hex’ creates something of the atmosphere of tongue-in-cheek film noir…Godwin’s ability to manipulate his voice to effectively portray a large variety of roles reminded me of the talent of Mel Blanc…The play is perhaps a bit too long to sustain its premises…But there is no question that ‘The Flatiron Hex’ is very imaginative and delightfully complex, something of a psychedelic journey into the brave new world of the computer age.”
Read more

“A truly odd marvel…It takes about ten minutes to ‘get into it’ but once your mind adjusts to its quirky nature you will find yourself enjoying it immensely…The sound, video, and lighting were truly remarkable…Yet the true genius of the show was its creator, James Godwin, who managed all the physical and shadow puppets…A hilarious, successful, and bizarrely-feel good live performance…For fans of the experimental and avant-garde this show is an absolute gem.”
Read more

“Along the way you are introduced to dozens of characters, all performed with sniper precision and impeccable timing…Godwin’s use of multimedia is simple yet effective…At times the comedy does get cheap…Overall the show is a delight. It is thought-provoking and intriguing. Godwin’s most outstanding contribution to this piece is his commitment...Godwin has clearly put a great deal of work and time into this show and it has paid off.”
Read more