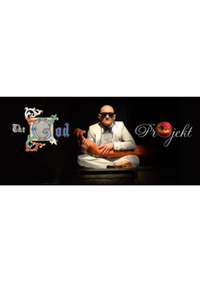 A raucous investigation into the secret history of God, featuring Catskill-style comedy, bloody puppetry, and a performance by Kevin Augustine as the "Man Upstairs."

Alone in a barren paradise, God the Father struggles with dementia as he tries to manage his divine office. While juggling an unending flow of prayer requests, he uncovers an ancient secret he'd rather remain forgotten: What happened to the Mother Goddess who once shared his heavenly throne? Lone Wolf Tribe and Untitled Theater Company No. 61 revive their award-winning, 2013 La MaMa production.

See it if you are a fan of cutting edge theater and amazing puppetry. I have nothing to compare this show to - it was truly unique.

Don't see it if you have no tolerance for alternate theater experiences. You hate puppetry of any kind. Read more

"This ambitious multimedia play with puppets had its premiere at a smaller La MaMa space in 2013. Revisited now in the cavernous Ellen Stewart Theater, it feels too diffuse, particularly in Act I, which is rather quiet and meandering...Just before intermission, the play’s action flashes back to a much younger God. The performance suddenly pulses with life, and Act II is more successful at sustaining it, beginning with God’s creepy-funny comedy routine."
Read more

“The Lone Wolf Tribe’s ‘The God Projekt’ is macabre McDonaghesque puppet play with overtones of Groundhog Day and Borsch Belt-style humor, where God is in a tragic time loop of his own creation. Kevin Augustine and Edward Einhorn co-wrote as well as co-directed and acted in this surreal, engaging puppet play. The playwrights tackle several suppositions: that God has dementia and that his gradual loss of faculties is a result of murdering his ‘significant other’ -- the Great Mother.”
Read more

"The play effectively questions the importance our society puts on masculinity as well as the father-son legacy, at the expense of sacrificing female bodies...Augustine does a stunning job physicalizing the aging God with hyper-realistic prosthetics...While there are structural flaws in this production, 'The God Projekt' is a bold theatrical statement that explores a question that is ancient and relevant. The creators’ efforts in searching beyond canon should be celebrated and emulated."
Read more

"Lone Wolf Tribe’s multimedia production, which returns to La MaMa’s annual Puppet Series after a run in 2013, deserves a second look. First of all, there are the startlingly grotesque puppets...Augustine turns in a commandingly versatile performance...If you’ve ever had a problem with the notion of a benevolent Father and wanted to raise a middle finger to the Heavens, 'The God Projekt' might be the answer to your prayers."
Read more

"'The God Projekt' moves at a very slow, deliberate pace and watching it takes more than a little patience. But it rewards those who have it with a startling story and visual splendor. Augustine's performance as God is captivating and powerful...For a thoughtful, exhilarating meditation on faith, theology, and the art of being able to move on from the past, head to LaMaMa. You may not know exactly what you're seeing at the time, but I promise you it'll stay with you."
Read more

"'The God Projekt' is part macabre puppet show, and Augustine’s creations are masterfully unsettling, crawling about doggedly before their Father has made them legs, or reduced to a head that still babbles are-we-there-yet questions about the final peace of Judgment Day...Through use of simple props and quietly magical effects this is set in motion in a way which takes an angry, perceptive, hilarious, gloomy narrative to an unexpectedly, unforgettable moving conclusion."
Read more

"In genius puppeteer Kevin Augustine's frustrating, astonishing 'The God Projekt,' the Judeo-Christian God turns out to be an old coot with a terrible filing system…To be clear, there were moments in 'The God Projekt' when I thought Apocalypse couldn't come soon enough. Augustine takes his sweet time unfolding his indictment, and God's bumbling routine can make you impatient. Looking back, though, it's one of the most startlingly intense shows I've seen."
Read more

"Unusual and thought-provoking, if too diffuse to carry the full impact of its ambition…It’s all in the service of some cutting-edge puppetry, not technologically but creatively…But there are too many slow-moving elements for anxiety to mount in a sustained way…The Yahweh character study is compelling, too, along with the questions raised along the way. Ultimately, what this experimental work lacks in focus it makes up for in ingenuity. "
Read more