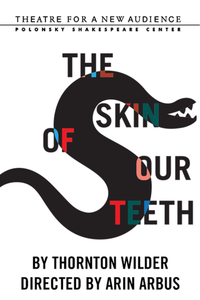 Closed 2h 30m View in admin
The Skin of Our Teeth
Brooklyn
78
Buy tickets from $60
Score it Scored!

The Skin of Our Teeth NYC Reviews and Tickets

Written during the darkest period of World War II, this timeless play has not had a major New York production since 1998. Wilder’s quintessential Antrobus family copes with chaos, and the frustrations of parents and children set against the crises threatening humanity’s survival.

Wish I Could See Them All
671 Reviews | 208 Followers
80
Ambitious, Epic, Profound, Wacky, Quirky

See it if The human condition, over the entire course of history... sublime, suffering, and ridiculous. Unique material, creatively staged.

Don't see it if The person sitting behind me said to her friend at intermission, "What the hell was that?"

See it if You like a non traditional story that is clever and quirky and requires a bit of thought on your part. And if you enjoy Thornton Wilder work

Don't see it if You don't like non-linear/circular stories, the breaking of the fourth wall, and are undeniably odd and at times confusing.

“Ms. Arbus doesn’t entirely restore ‘Skin’ to newborn sprightliness. But she makes you appreciate why its first audiences cherished it…It’s as a big-picture production that this ‘Skin’ captures, tickles and distresses the imagination. Ms. Arbus has enlisted a crackerjack production team and a diverse cast of nearly three dozen to fill Wilder’s eternity-sized canvas. The production deploys them with wit and efficiency, while retaining an endearing air of ramshackle spontaneity.”
Read more

"Having influenced generations of avant-garde theater, Wilder’s nonlinear storytelling and metatheatrical trickery have lost much of their surprise, and his symbolism often feels heavy. Arin Arbus’s staging for Theatre for a New Audience prods this unwieldy epic forward...What’s missing is a more intimate sense of the central family as human beings and not merely archetypes. It’s a treat to see this seminal work on its feet...But the play’s strange comfort has gone a little cold."
Read more

“One of the lasting enigmas of this classic of the American stage that you'll either love or hate…Director Arin Arbus leads a production that is as visually impressive as it is bizarre…Not everyone will appreciate Wilder's idiosyncratic combination of philosophy and frivolity, which sometimes sags under the weight of its own hefty allegory. Still, it is impossible not to appreciate the work Arbus and her cast have put into this faithful revival, a rare opportunity to see this important work.”
Read more

"Has 'Skin of Our Teeth'...passed its sell-by date?...It's a clever, multilayered premise, dizzily balancing vaudeville comedy with unsentimental conclusions about humanity's destructive impulses, while insisting that...hope still lingers. It must have been something in its day...Arbus seems to wrestle with this problem, adding all sorts of contemporary touches...The result is definitely patchy, especially since Arbus has no real flair for the play's oddball lightly cartooned sense of humor."
Read more

"Thornton Wilder's 'The Skin of Our Teeth,' with its benign belief in the resilience of the human condition, is unlike any other American play you are likely to see. Both heavily influenced by earlier European experiments in theater, it is also influential in itself. While Arin Arbus' production for Theatre for a New Audience at times seems as though it needs tightening up, it is a play that must be experienced in the theater, which is why it has never been turned into a Hollywood movie."
Read more

"Relevance is the key here. Thornton’s work, remarkable for its time, only holds up in parts. The first act is easier to connect to: stories of hard times, helping refugees and a longing for a better life. But it’s harder for an audience to relate to the remainder of the play...Arbus and the cast do a remarkable job...'The Skin of Our Teeth' is fodder for deep reflection, and though harder to relate to in a modern era, still lays before us an often painful universal truth."
Read more

“If you haven't already done so, get a ticket to see the Theater for a New Audience production...What makes it well worth a trip to Brooklyn?...Pretty much everything!…Director Arbus is as inventive as Wilder's central characters…’While this 'Skin of Our Teeth’ resonates uncomfortably with our own world, it is a more powerful than ever theatrical experience that will have you laughing and enjoying yourself, even as it leaves you contemplating how to remain optimistic."
Read more

"Imaginatively directed by Arin Arbus, Thornton Wilder’s 'The Skin of Our Teeth' is a wildly original, ambitious tragicomedy...The theatrical experience is unlike any you’ll probably have. With all its farcical and absurdist dramatic elements, Biblical allusions, topsy-turvy timeline, and musical interludes, it is a singular production with a universal human story at its core. After all, Wilder wrote it meaning to unite humanity, a sentiment all too crucial in this modern age."
Read more

“A sprawling, ambitious piece of work…It is also a piece of meta-theatrical genius…This blending of period, location, and persona captures a wide range of American history in turn comical and poignant…Arin Arbus’ production is notable for its inventiveness and its nimble negotiation of the play’s spiraling tone…Even three quarters of a century later, it feels daring and brave. 'The Skin of Our Teeth' is an intelligent play and an intelligent, and immensely enjoyable, production."
Read more

"Wildly inventive, if occasional unwieldy...Directed by the brave and creative Arin Arbus, 'Skin of Our Teeth' is clearly not for the faint of heart or the accidental tourist...It is difficult not to appreciate the effort and the obvious talent. Theatre for a New Audience has become a perfect neighbor for BAM, pushing the envelope even more so in its choices. A worthy and admirable addition...Will it make you laugh in these times? Not so much. And maybe that’s the point."
Read more

"Wilder's drama couldn't ask for a better production. It may not make you like or understand Wilder's determinedly anachronistic work any better, but Arbus and her ample crew...definitely know theatrical CPR...Wilder's play, sliding from philosophical profundity one moment to comic archness the next, gets a high-energy performance, with rousingly intelligent performances by each leading actor and most supporting ones."
Read more

“As wacky as Wilder intended it to be…Director Arin Arbus commits totally to the play's deliberate absurdities and adds a few innovations of her own…In short, there's a lot going on. Some of it overwhelms the story line. But, like its characters, Wilder's play is resilient and its belief that humanity has survived all kinds of challenges in the past and so will be able to get through bad times again manages to shine through."
Read more

"I was kind of besotted by the vision of director Arin Arbus, even as I thought perhaps here and there a transition or change in style might have been done better...Anyone who hasn’t seen this show yet–and it’s rarely done–should not waste a moment to see it done with verve and determination...Like any great play, 'Skin' now seems very timely—with its whiff of dishonest politicians and the world spinning out of control, you’d swear it was written last week...Inevitably flawed but fascinating."
Read more

"To her credit, director Arin Arbus saw that the current era of turmoil made 'The Skin of Our Teeth' ripe for revisiting. Unfortunately, her production adds much more wood to the trees...The production starts unpromisingly...From this tepid beginning things just trundle along...Wilder’s playwriting tricks are given distracting 'help' under Arbus’s direction...Rather than guffaws, the result adds layers of puzzlement that undermine the genuine humor."
Read more

"In fact, 'The Skin of Our Teeth' may be more a play for times of calm, times when we are more likely to forget our origin stories...coupled with a long view of history, one that is cyclical rather than progressive, it does seem to indicate that we have been through all of this before and made it out the other side."
Read more

“A striking revival…Both the playwright and director Arin Arbus make clear that if the audience starts to feel too comfortable with the story, then they are not doing their jobs. Arbus deserves credit for taking the script, which, in the wrong hands could easily become a lengthy farce or an endless diatribe, and turning it into a compelling story of one family’s survival and, through them, the survival of humanity...A fascinating look at what human beings are capable of."
Read more

“Wilder's text demands a directorial one-two punch — a joyous spirit that can sustain the superficial brightness while keeping a firm grasp on its dark underpinnings. Arin Arbus's production gets more of both than I've experienced in any previous staging…Arbus sometimes wavers...But these minor flaws shrink in the larger context: A big, important American play has been reawakened for a historical moment that desperately needs it.”
Read more

"'The Skin Of Our Teeth' now seems as apt as ever...Kecia Lewis is truly extraordinary as Mrs. Antrobus...Just as Wilder predicted that the human race would always get by albeit by the skin of their teeth, so too has Wilder’s play managed to survive and be constantly revived despite those who can’t begin to get into it. Considering the bang-up job Arbus has done with this masterpiece, just go with the flow, the allegory and the achievement."
Read more

"Arin Arbus’s current Theatre for a New Audience production, the first of the 1942 tragicomedy in New York City since 1998, reveals its – and Wilder’s – relevancy...Theatre for a New Audience proves at once that this is not an impossible play to stage. That is, if audiences allow themselves to hear Thornton Wilder’s definition of family values: Survival is assured when everyone works together and keeps their books safe."
Read more

"The resulting production is flawed—for me, key elements of Wilder’s tone are sometimes missing—but I’m very grateful to have seen it...'Skin of Our Teeth' needs to begin with at least a superficial connection to a real, recognizable world. In Arbus’s production, there isn’t much of that...Still, there are lovely, memorable things throughout Arbus’s production...I wish that 'Skin of Our Teeth'—an allegory and a fable for sure—didn’t look quite so allegorical as it does here."
Read more

"A brilliant and timely production...A miracle of theater, and one that probably should be seen by anyone who worries about where all of us are going...This production is, simply put, is a revelation. As directed by Arbus, it combines just about every theatrical element that exists under the sun...The giant cast crowd the stage and the audience, and almost every single one of them, from lead performers to members of the chorus, have moments to shine...I can’t praise this show enough."
Read more