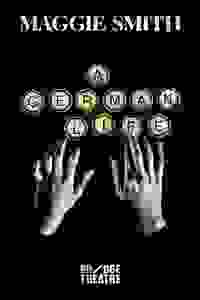 Multi award-winner, Maggie Smith returns to the stage in a one woman show about Brunhilde Pomsel.

Christopher Hampton's new play is based on the real-life testimony provided by Brunhilde Pomsel, a stenographer who was employed by Nazi Propaganda Minister, Joseph Goebbels. Starring Oscar, Tony and Olivier Award winner Maggie Smith (Downton Abbey, Harry Potter) in a performance which marks her return to the West End stage after 12 years.

A compelling history lesson. An acting master-class like no other... It’s a performance of ripe ambiguity, not a phrase misjudged, every movement contributing...'
Read more

...this is more than just an event and a landmark, but a skilfully and understated evening of thrilling acting by a veteran performer still at the very height of her powers.'
Read more

It is an astonishing thing to see Maggie Smith hold an audience in the palm of her hand. Alone on stage for an hour and 45 minutes...she brings a woman and a world to life.'
Read more

Maggie Smith shines as Goebbels' secretary,,, Smith returns to the stage in triumph as she relives one woman’s extraordinary experience in Nazi Germany.'
Read more

Maggie Smith triumphs again. This memoir of a Berlin secretary in the Nazi era is the theatre event of the year...Despite her claims of not feeling ethically troubled, the odour of deception hangs in the air.'
Read more

Kent’s production is one of careful bagginess; there’s a slack at the beginning that gets pulled increasingly taut, like a fishing line. Smith toys with us, charms us and fools us – she has us hooked.'
Read more

Dame Maggie Smith returns triumphantly. For the 100 minutes of Christopher Hampton’s monologue... she holds the audience in the palm of her hand.'
Read more