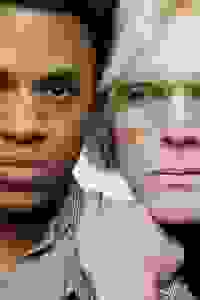 View in admin
The Collaboration
London: Southwark
83
Score it Scored!

The Collaboration London Reviews and Tickets

It's 1984 in New York City and Andy Warhol’s star is falling. The wonderkind of the modern art scene, Jean-Michel Basquiat, agrees to collaborate with Warhol on a new exhibition, which soon becomes the talk of the city. The two artists embark on an artistic and personal journey that redefines both of their worlds.

See it if you don’t mind a low-key, introspective play examining the relationship between Warhol & Basquiat. Jeremy Pope is fire in everything.

Don't see it if you need more excitement than a interesting character study of a play.

See it if you want to learn about the relationship and rivalry bw/ Basquiat and Warhol or you are keen to see Pope or Bettany on stage.

Don't see it if you don't like loud music or you prefer productions that don't want you to suspend disbelief throughout the play. Read more

See it if You know nothing of art.

Don't see it if You know ANYTHING about 20th Century art, and you think that Warhol literally killed art..like totally... like.. he killed it.

See it if you adore intelligent discussions about how we can perceive art, what it is and what it can be

Don't see it if you can't engage with deep discussions

See it if Great direction, mesmerising performances and a DJ set that was awesome! Saw it twice and enjoyed both times.

Don't see it if You don't want to!

See it if If you enjoy great acting, a gripping story and fascinating insight into art and culture through the eyes of two very different artists

Don't see it if If you don't like dialogue-heavy and occasionally challenging drama.

See it if you like seeing two actors with incredible chemistry, and interval DJ sets!

See it if You love art and recognise the resonance between 1980s New York and today's London. You want to grapple with race, identity and image.

Don't see it if You are not willing to think along with the characters. You want action, lullabies and simple answers.

It is, as I say, terrific entertainment. But there’s no getting away from the fact that it’s wildly contrived...It is fanfic, even at one point bordering on slash fiction, and pretty difficult to take entirely seriously.
Read more

An ebullient production under Kwame Kwei-Armah’s direction (there is even a live DJ though, oddly, the music is only cranked up in between scenes), it has two star turns in the central performances and a spectacular set from Anna Fleischle...
Read more

[Anthony] cleverly weaves his arguments about the nature of art, the origin of inspiration and the corruption of the art world into a story that hangs roughly on the lineaments of the two men's lives.
Read more

For a play about mould-breakers, it’s structurally and dramatically formulaic, but McCarten has a real knack for humanising icons – for digging beneath the image to reveal the flaws, the contradictions and emotional complexity.
Read more

The dialogue between an aphoristic Warhol and a sullen Basquiat takes ages to spark. After a gluey first half it finally does so in response to an off-stage calamity.
Read more

The leads are excellent, in challenging roles...As a whole, it’s entertaining when it might have been electrifying.
Read more