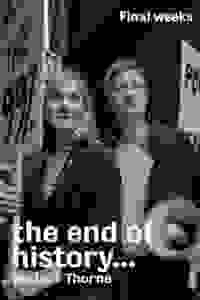 View in admin
the end of history...
London: Sloane Square
Score it Scored!

the end of history... London Reviews and Tickets

Jack Thorne's drama which follows the socialist parenting styles of Sal and David across the years.

Unconventional parents, Sal and David attempt to raise their children in a way that aligns with their socialist values but soon realise that none of their children are truly happy. A new play by Jack Thorne and directed by John Tiffany who previously collaborated on "Harry Potter and the Cursed Child" and "Let the Right One In".

Kate O’Flynn and Lesley Sharp give stunning performances in Jack Thorne’s family drama...a heartfelt and likeable tribute to Thorne’s parents’ generation that takes too long to warm up to really make its point.'
Read more

You marvel afresh at Thorne’s ease with dialogue...the subtlety is part of the charm... Yet you’re left with a curious sense that, as with history, this is a work in progress.'
Read more

This tender, bracing and beautiful portrait of family life is a throwback in many ways...a seriously good, warm-hearted play that had me hooked.'
Read more

while Jack Thorne’s new play is avowedly personal, always interesting and beautifully staged by John Tiffany, it left me wishing for a deeper connection between the family foreground and the historical background.'
Read more

...an intimate drama based on Thorne's own family, which resolutely refuses to fly...there are a lot of clever lines, but they often seem imposed on the characters rather than arising naturally from their thoughts.'
Read more

The title promises a political emphasis but instead devolves into the sort of parent-child agon that Philip Larkin might well recognise...raises more questions than it answers.'
Read more

Lesley Sharp is painfully funny in this clever, intriguing production...Jack Thorne and John Tiffany's new play is both satire and celebration.'
Read more

Brooding, dysfunctional family charts course from Blair to Brexit...while it’s animated by serious ideas about progressive values and packed with quotable lines, it has a frustrating lack of focus.'
Read more