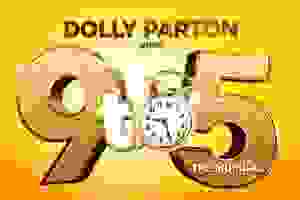 View in admin
9 to 5: The Musical
London: West End
80
Score it Scored!

9 to 5: The Musical London Reviews and Tickets

Inspired by the hit film and brought to you by Dolly herself, this new West End production is about teaming up, standing up, and taking care of business!

9 to 5 The Musical tickets are available now for the 2019 West End run at The Savoy Theatre!

Based on the 1980 hit movie starring Dolly Parton, 9 to 5 The Musical has come to London after a UK tour and London Fringe Premiere. With the characters you loved from the film, songs (music and lyrics) by Dolly Parton herself, and a book by Patricia Resnik, 9 to 5 tells the story of 3 working women who find their voices and take control. Dolly Parton’s Oscar, Tony and Grammy Award-nominated score comes to life on stage. This incredible West End run stars Louise Redknapp, pop solo star and formerly of R&B group Eternal, and Strictly Come Dancing, Amber Davies (Love Island), Natalie McQueen (Wonderland, Murder Ballad, Les Miserables ) and Brian Conley (Chitty Chitty Bang Bang, Hairspray, Oliver!, The Music Man, Barnum)

Consolidated Industries is managed by the extremely sexist and self-important Franklin Hart Jr. Violet is a long time employee, she’s always on top of things, knows about everything and trains everyone. Doralee is Mr Hart’s secretary, he makes advances to her which she constantly rebuffs. Judy has just started working at Consolidated but is struggling as she has no work experience. The women come together to teach Mr Hart a lesson and improve the company for everyone. They leave him hanging at home and decide to run the office their way!

After finishing a highly successful UK tour this summer, 9 to 5 has arrived in London’s Savoy Theatre. The original 2009 Broadway production of 9 to 5 got 15 Desk Drama Award nominations, the most of any single production in a single year, as well as 4 Tony Award nominations.

Don't see it if You're looking for something more serious.

See it if You enjoyed the movie or are in the mood for a light, fun show. Good overall production and an entertaining night out.

Don't see it if You are expecting high art or challenging material.

See it if You love Dolly. And want light night out.

Don't see it if You are seeking something meaty.

See it if If U like the truth given to U musically & how we feel about where the boss puts their hands when he/she (in this day & age) isn't my lover.

Don't see it if You are wayyyyyy to sensitive about life.

See it if If you love Dolly Parton songs put in the funniest story on stage.

Don't see it if Country is not your type and if you don’t like crazy story that goes wild !

See it if definitely good if you’re familiar with the soundtrack and storyline, rly enjoyable and fun show

See it if You like a funny show with Dolly Parton's music on it!

Don't see it if You expect a neater narrative.

“This colourful, feelgood - but also flimsy and slight - show has done that for Parton and Resnick again. Firstly, owing to the basic need for escapist froth, as alarm-bells ring politically. More saliently, it chimes with the #metoo moment. Yet the evening doesn’t take itself too seriously...It’s certainly not for everyone, but there are worse ways of spending a few hours after a hard day at the office.”
Read more

“The show itself is unashamedly a period piece and about as subtle as a sledgehammer...The show is a piece of slick commercial packaging, but it still argues that equal pay, flexible hours and in-house daycare are not only vital targets but also make for better business. While the musical is a simplistic revenge fantasy, it is stylishly put across in Calhoun’s production...This may be mass-market feminism but, with its advocacy of workplace equality, I could not bring myself to dislike it.”
Read more

“A show that knows exactly who it is pleasing and does so with a lot of energy, if not a huge amount of style. The best things about it are all courtesy of Parton who provides songs, lyrics and tone...There are also some good jokes, a lot of warmth and some terrific songs...It all adds up to brash, enjoyable fun, not quite as classy as Parton herself, but perfectly pitched for its audience who are all out to forget the 9 to 5 and have a really good time.”
Read more

"Calhoun’s West End production rarely takes you by surprise, but it never really lets you down either...If '9 to 5' is good rather than great, it’s because the wit is a bit obvious; because Parton tends to deal out deftly articulate midtempo tunes rather than outright belters...Whether or not you’ve seen the film, though, you always know where it is going. Its brushstrokes are broad. It’s fun, it’s neatly done, it just lacks a bit of wow factor."
Read more

“This musical version swamps its story in inch-thick makeup and foot-high hair. This is very much of the more is more school of musical theatre...There’s an aimlessness and playing-for-time quality to some of these tunes that hollow it out, though there’s still a lot of fun...Fun, if gaudy and silly, but its feminist message, when compared to the film, is like costume jewelry next to a Faberge egg. It’s still very entertaining, and after all these years it feels, depressingly, necessary.”
Read more

“Parton's somewhat hallucinatory musical is a wilfully preposterous crowd-pleaser...Although this show started out...in 2005, it feels pretty post-Weinstein, with its uncompromising focus on male shitness and violent retribution...The plot is about as ridiculous as these women’s ultra-glam interpretation of ‘office wear’...Fortunately, no one even pretends to take it seriously...‘9 to 5’ is this show’s best song, and it knows how to use it, ie as often as possible."
Read more

“A very strange choice of West End musical...Fans of the ditzy eponymous 1980 Dolly Parton film will love it but everyone else is likely to be left mystified at quite how this grimly reductive material fits into the current post-#MeToo narrative...This is, intentionally, bubble-gum stuff, but it’s of a peculiarly acrid flavour...There’s not enough real firepower...I left feeling dispirited, cheered only by the fact that Langford can still do the splits with such panache.”
Read more

“This pantomimey adaptation, sticks close to the script of the hit film but fails to replicate its sharp spirit...A stick-it-to-the-chauvinist revenge fantasy...The revenge plot is farcical, and as such it stretches itself happily into a series of upbeat but mostly forgettable musical numbers...In adapting it as a musical for the 21st century, Resnick has...regressed its politics...Perhaps it’s a trick of memory to think that ‘9 to 5’ was really a first-class film in the first place.”
Read more