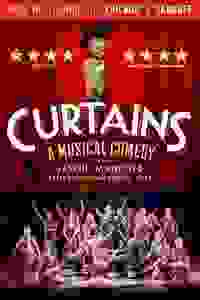 When the star of the show dies mysteriously during opening night, the local detective is called in to find out whodunnit! Hilarious musical comedy with music and lyrics by Tony Award winning duo John Kander and Fred Ebb and additional lyrics by Kander and Rupert Holmes. Starring Jason Manford (The Producers, Guys and Dolls) as the lead detective and Carley Stenson (Les Misérables, Legally Blonde, Shrek) as Georgia Hendricks.

See it if You enjoy the who dunnit firm, but with added comedy. Well staged and written.

Don't see it if You want to see a straightforward drama, this is played for laughs!

There are worse ways of killing time when you’re in a holiday humour, but can you live without it? You betcha.
Read more

Perhaps you’ll find something heroic in this snarky murder mystery musical...You could certainly do worse than this show. You could also certainly do better.
Read more

I thoroughly adored this most knowing of Broadway musicals, delightfully directed by Paul Foster and energetically choreographed by Alistair David.
Read more

When it comes to closing out the West End year on an unanticipated high, Curtains has arrived not a moment too soon: cheers, not sneers, all round.
Read more

Curtains ends up as a perfectly likeable, undeniably clever pastiche that doesn’t entirely solve the mystery of why it should take the best part of three hours to get the job done.
Read more

Jason Manford is a charming, showtune-obsessed homicide cop in this fun companion to Chicago and Cabaret.
Read more