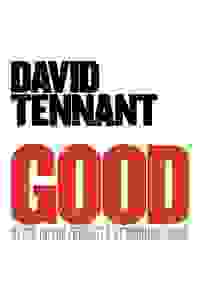 John Halder is the example of an upstanding citizen and a good man. But in Germany in 1933, anything and anyone can change. 'Good' charts Halder's life over the course of eight years as he works his way towards the upper echelons of the SS, and his shift from a liberal literary professor who believes he can lead the Nazis onto a humane path, to an egomaniacal autocrat who becomes increasingly detached from reality.

BAFTA and Emmy Award-winning actor David Tennant leads in this new production of C.P. Taylor's drama. David Tennant is best known for his work in television, starring in hit shows such as 'Doctor Who', 'Broadchurch' and 'DuckTales', as well as his acclaimed stage work as part of the Royal Shakespeare Company.

Tennant will star alongside recent Olivier Award-winner Elliot Levy ('Cabaret') who will be taking on the role of Jewish psychiatrist, Maurice.

See it if you want to see how easy it is to be pulled into a web of evil.Very important during this time of rising racism, hatred, intolerance.

Don't see it if you want a light comedy.This show is important.Incredible acting, well directed, excellent writing. See it.

See it if you enjoy well-written plays on banalities of evil. Mr. Tennant is terrific as a 1930s German intellectual rationalizing Nazi party ideology

Don't see it if you have a hard time following actors playing multiple roles, sometimes switching mid-sentence, or events that are presented out of sequence Read more

See it if To see David Tennant on stage

Don't see it if I found it slow, and was unable to get into the piece. Found it very confusing and badly staged.

See it if you want an engaging play depicting the ease with which one's morals can be twisted if you allow it. Fantastic from Tennant, as you'd expect

Don't see it if you're not prepared for what ends up being quite a philosophical evening at the theatre or you need a lush set to be engaged.

See it if you want to see a play about the Holocaust (everyone probably should, but the very elderly may get extremely upset).

Don't see it if you want to see a fun light play or you're not prepared to seriously consider the subject matter. Read more

See it if you think "It can't happen here." You want to better understand how important a moral compass is, and what happens when it's lacking.

Don't see it if You prefer to think that none of us could fall into this trap.

Don't see it if you like things cut and dry; you like kitchen sink realism Read more

"Although grimly funny and studiously banal at times, it progresses inexorably...This is an important rather than an enjoyable watch."
Read more

"In a hypnotic performance, [Tennant] ... keeps us in suspense, giving conspiratorial flashes and darkening into malevolence, but, in the main, eerily neutral and preoccupied ... Less commendable are the Cabaret-style ticket-prices at the top end: £155 for the seat I was sitting in? It was good, but not that good."
Read more

" 'Good' is a gradually enraging drama that makes us hear afresh the denials that lead populism into dangerous waters, and may well be a lesson for our times."
Read more

"It's a chilling performance rather than a moving one...Good isn't perfect, but its lessons demand to be understood."
Read more

"Don’t expect fireworks. What you get is something stranger, more insidious, and I suspect much more memorable."
Read more

"It’s a strong framing, and there are striking, resonant messages within this work, but as drama it unsettles when really it should devastate."
Read more

"...the play’s pertinence, in our age of populism, scapegoating and sloganeering, remains sharp. It’s a grim nightmare of quietly lethal potency."
Read more

"The text is baffling in form, with scenes that don’t always follow a linear narrative order, while the character’s lack of definite identity prevents the production from ever feeling truly disturbing."
Read more