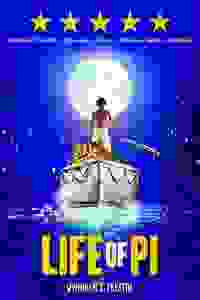 The global best-selling novel is brought to the stage featuring puppetry and stunning visuals.

When Pi Patel survives a disaster at sea, he embarks on an extraordinary journey back to safety along with some unexpected animals.

Based on Yann Martel's Man Booker prize-winning novel which has sold over 15 million copies across the globe. Adapted for the stage by Lolita Chakrabarti ('Hymn') and directed by Max Webster ('As You Like It').

Don't see it if You dislike whimsy.

See it if You enjoy elaborate staging. Production design and the puppets are incredible. Great story.

Don't see it if There is something for everyone here. Most people will enjoy!

See it if you loved the book or never read the book.It is beyond brilliant.I LOVED the book and didn't know how it could be done on stage--they did it

Don't see it if you want a dull straight play or a mindless musical.This is brilliant in the same way that War Horse was.It makes you use your imagination.

See it if you want a truly different yet impactful theater experience. The creativity here is boundless. You won’t see anything else like it.

Don't see it if you hate originality.

See it if you love puppets.

Don't see it if you REALLY want something as profound as the source material. Read more

See it if you like theatrical spectacles that are creative, magical and fun, delivering beautiful storytelling that stays with you. Great for kids too

Don't see it if you're expecting a deep thoughtful play. This story is well-known, the play doesn't add much to it, characters are wooden, acting is so-so.

See it if you loved the movie and want to see it reproduced as a play. This is a very entertaining show.

Don't see it if you can't easily transform images and let your imagination go wild!

See it if a beautiful play with some incredible puppety

Don't see it if it's a perfectly okay show. slow at points. goes off the rails a few time.

This stage version of Yann Martel’s Booker Prize winner has to stand as one of the most visually stunning theatre shows I’ve ever seen, especially in the feverishly beautiful second half...
Read more

There’s a philosophical thread to what unfolds. The fable asks big questions about how we can prove our version of events, the value of storytelling and our capacity to believe extraordinary things because we sense the world is strange beyond measure.
Read more

Still, under Max Webster’s direction, the stage is full of energy and surprise...These animals and effects are a wonder to behold and become the real stars of this show.
Read more

If you want theatrical magic, Life of Pi is the show for you. This stage adaptation of Yann Martel's Booker Prize-winning novel is an absolute feast of imaginative effects, bringing to life the apparently unstageable, with flair and jaw-dropping beauty.
Read more

...this production certainly has a spiritual or otherworldly sensation, and it absolutely demonstrates the transporting joy of magnificent theatrical storytelling.
Read more

This is the spiritual successor to War Horse. It draws on the same depths of stage creativity, but it uses everything else that theatre has become capable of since then.
Read more

As the production unfolds there is much to love, but its astonishing power comes from the puppetry, which is overseen by Finn Caldwell who has a pedigree that goes back to the National Theatre’s War Horse.
Read more