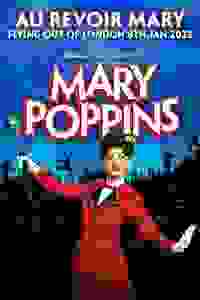 The practically perfect nanny, Mary Poppins is called in to take care of the wealthy Banks family children.

A stage adaptation of the beloved P.L. Travers' book series of the same name. The Disney and Sir Cameron Mackintosh production with music by the Olivier Award-winning composers George Stiles and Anthony Drewe and script by Oscar winner, Julian Fellowes ('Downton Abbey').

Starring Zizi Strallen ('Follies') in the title role as Mary Poppins and Charlie Stemp ('Half a Sixpence', 'Hello Dolly!') as Bert. Nominated for the 2020 Olivier Award for Best Musical Revival. This production is recommended for ages 7+.

See it if you like overly long Disney stage adaptations - this is for you.

Don't see it if Charlie Stemp is off. I love understudies, but this show drags & needs a star to save it. It might’ve been better if he was on at our visit.

See it if You’ve never seen the legendary Petula Clark, still stopping the show at age 89.

Don't see it if Family musicals are not your thing.

Don't see it if you are looking for something unexpected. You know this story.

See it if you want a supercalifragilisticexpialidocious evening of fun and laughter, replete with wonderful singing and dancing.

Don't see it if you don’t like very tame Disney-fied musicals, featuring all the Disney tropes you might expect it if you dislike children at the theatre. Read more

See it if you like slightly old fashioned shows with a LOT of set and you want value for money.

Don't see it if you have an ounce of cynicism in your body.

See it if You want a fun night out. The show is brilliant with several show stopping moments. All aspect are executed well.

Don't see it if You want a deeper more thought provoking show.

See it if you want a magical night out. This is a very special show.

Don't see it if you hate Disney or the original film.

Half-baked story aside, ‘Mary Poppins’ serves up everything you could want in a mega-budget family musical: memorable songs, dazzling visuals and a nostalgic ideal of a London that never existed. It’s supercalifragelistically good fun to visit for an hour or three.
Read more

Zizi Strallen (who played the role on tour in 2015) might have stepped from a picture-book. She is, to cite one of the better songs of the blandish cache by Stiles and Drewe (augmenting the bankable Sherman Brothers classics), “practically perfect in every way”.
Read more

But for nearly three hours, at least, you can park some of those worries at the door, and simply bask in the gentle familiarity and delightful uplift of this story and the spit-spot production it has been given...
Read more

The iconic musical makes a welcome return to the West End...Although it often conjures the movie, the stage show undoubtedly has its own tart tone.
Read more

As an alternative to panto, the production makes a perfectly acceptable family outing. As a musical, it doesn’t quite take flight.
Read more

Travers scholars may still miss the darkness of the books, but for the rest of us the show is an unassailable treat and Eyre’s production has acquired the heart to go with its art.
Read more

All contribute to a lavish if somewhat muddled and inescapably old-fashioned revival – sure to succeed commercially via the nostalgic power of Poppins, but, unlike its titular nanny, never quite taking flight.
Read more