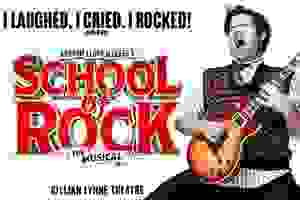 Based on the hit film, this rock musical comedy features songs by Andrew Lloyd Webber and a cast of young actors who not only sing and dance but also play their own musical instruments.

School of Rock the Musical features music by the incomparable Andrew Lloyd Webber with lyrics by Glenn Slater and a book by Julian Fellowes. Based on the hit 2003 film, this irresistible new rock musical follows Dewey Finn a wannabe rock star and guitarist who is down on his luck. After being kicked out of his band, and nearly out of his flat Dewey decides to make a bit of quick money by posing as a supply teacher at a prestigious prep school.

When Dewey discovers that his straight-laced straight A students might have rock and roll in their souls he forms a band, and a plan to win an upcoming Battle of the Bands competition. Now he just needs to figure out how to get his students to the gig without their parents, or the headmistress finding out and putting an end to their hopes of winning it all.

School of Rock tickets have remained some of the most sought after in the West End since the show opened here to rave reviews in 2016. This show has heart, talent and plenty of rock. School of Rock at the Gillian Lynne Theatre is the perfect show for everyone in the family!

See it if you want to see a musical that gives you the nostalgia of the original film, adapted faithfully for stage with an expanded score.

Don't see it if You’ve never seen the original film or have a distaste for Jack Black- whose mannerisms and humour are recreated by the shows protagonist.

See it if You want an entertaining show with great songs and talented children.

Don't see it if You want breathtaking, showstopping sets and design.

See it if You like a good sing and dance

Don't see it if You don’t like musicals about children

See it if You like the original movie. The music is so fun! The children are so talented and really fun story!

See it if You like a good tune, a good story and seeing enormously talented young people!

Don't see it if You are hoping for edgy or unexpected - it isn't those things, but it is really good fun!

See it if Loved the movie

"Sure: ‘School of Rock’ is basically harmless. But there is, at the very least, something a bit Luddite about a show so smugly adrift from the present, so determined to posit the caterwauling of a bunch of ’70s bloke rockers as the sum total of musical achievement. But here’s the thing: the kids are really cute. And really talented. You would have to be an absolute monster to not be charmed and impressed by the little pipsqueaks."
Read more

"I caught it in New York this summer, and adored it. The big question, though, was whether the same magic could happen here. The answer is a resounding yes...'Team' Lloyd Webber have improved on this vaguely preposterous but resonant fairytale of salvation through disobedience and primal playfulness. What was funny becomes doubly so...The production hits exactly the same high notes of hysterical excitement as the New York version...The most enjoyable few hours money can buy."
Read more

"It is the music that matters most, and Lloyd Webber delivers a tuneful collection of pastiche rock and charming ballads...It’s not a show that takes itself too seriously, but it has a heartwarming message about the value of self-expression for children...It is just occasionally a touch too knowing, in the way of a panto script that nods and winks to the adult audience, but this is a genuine family musical with cross-generational appeal...It has been executed with a heartfelt amount of art."
Read more

"Fast-moving, loud, and metal-motivated...Well-nigh irresistible...Briskly directed by Laurence Connor and smartly choreographed by Joann M Hunter, the action unfolds with great fluency...David Fynn plays Dewey with a kind of shambolic warm-heartedness, but it is the cast of children - all uniformly excellent - who are the stars...You'd need a heart of stone not to melt at its sheer joy."
Read more

"Although the show occasionally feels as if a pair of avuncular old rockers are letting down the remains of their hair, it has an overwhelming good nature and allows its preteen performers to display their genuine talent...One of the pleasures of Fellowes’s book lies in its predictability...What is good about the show is that it also seems to release something in Lloyd Webber, and allows him to return to the rock roots of his past...This is Lloyd Webber’s most exuberant show in years."
Read more

"The kids are more than alright – in fact, they’re an absolute joy in this ridiculously entertaining new show...The show, directed by Laurence Connor, is a quirky hoot with a heart, a fable about the empowering force of music that crackles with mischief and sly irreverence...Serenely indifferent to the narrative implausibility but shrewd and truthful about the relationships thus forged."
Read more

"Andrew Lloyd Webber at his most playful...This infectiously upbeat musical was a hit in New York and should be one here too, once a few wrinkles are ironed out. The script, sharp and current...The lyrics are clever and never naff. The theme, that music can help you belong, help you find your voice, your niche, could not be more current...It is the kids who make this musical: it’s not as sophisticated, or as dark, as 'Matilda the Musical,' but the story never felt too trite or stereotyped."
Read more

"It’s a great family-friendly show to take kids who are rebelling from stories about cutesy animals and want to get their teeth into something that feels a bit feistier...The stellar cast of young kids, surely the big stage stars of tomorrow, are given songs that really showcase their vocals whilst they play all their own instruments live too. For those about to see the 'School of Rock,' we salute you."
Read more