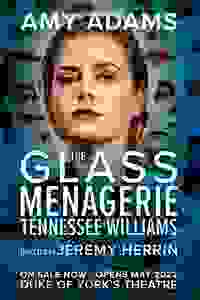 The narrator, Tom Wingfield, recalls a story from the summer during the late 1930s. During austere times for the people of St Louis, Amanda Wingfield is resolute that her children will experience a better life than her own.

The landmark memory play written by acclaimed 20th century American playwright, Tennessee Williams that launched his career. Williams' other notable works include 'A Streetcar Named Desire' and 'Cat On a Hot Tin Roof'.

See it if you don’t mind a play that’s a little old-fashioned but performed by great actors.

Don't see it if you would be a little bored at a somewhat dated play.

See it if you love Amy Adams or the play.

Don't see it if you don't like plays in general. Read more

See it if You are a fan of Amy Adams

See it if you like T Williams and A Adams. But, be forewarned: Adams can’t carry the title role; other cast members not much better. Sets don’t help.

Don't see it if you don’t mind an amature approach to one of TW’s finer plays. No delicacy. No heart.

See it if you like classic plays done well

Don't see it if you don't like slow paced shows

Don't see it if Go on Youtube and check out the Joanne Woodward, Joh Malkovich, Karen Allen production instead. Read more

Don't see it if you like quick flowing narratives

See it if You like the play, serious acting, Amy adams and stories about controlling parents

Don't see it if You want kids of action, there isn’t much, it’s also very awkward and you feel so terrible for Laura the whole time

It’s a humane and even beautiful take on a classic play. But ‘The Glass Menagerie’ is one of the greatest plays ever written, and this production lacks its full, devastating potential.
Read more

I can see Herrin’s production working in a small, studio setting, where the younger actors would shine. But as a West End star vehicle, it barely passes its MOT.
Read more

I loved [Amy Adams'] performance. It’s clear, simple, believable, and quietly heart-breaking. Hats off to Adams for taking a leap in the dark for the summer season. Still, it’s not quite the stuff of fairy tales.
Read more

Adams’s West End debut is solid but unremarkable. Under the direction of Jeremy Herrin, the first half feels flat-footed. One of the biggest problems is the size of the stage, which looks vast and works against the intimacy of this story.
Read more

The casting of the Hollywood luminary Amy Adams .... may be the main selling point. Whether the gambit works is another matter. The details are stylishly assembled but they fail to carry the evening.
Read more

The actors are left rather stranded by [the] bare-bones approach. It’s a set-up that might work better in a more intimate venue, but isn’t terribly well suited to a West End house.
Read more

The Glass Menagerie is typically funny as well as tragic, but this production is light on laughter. That’s mostly down to Adams, who delivers a likeable but underpowered performance. This staging lacks the vigour to fully hit home.
Read more

Herrin is keen not to turn memory into something beautiful and elegiac, but restrained and uncomfortable instead. Sometimes it just feels off-pitch, aiming for a high note it doesn’t quite reach.
Read more