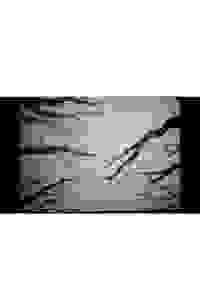 Manual Cinema combines shadow puppetry, film techniques, and live music in this mythic reinvention of the coming-of-age story. Part of the Public Theater's Under the Radar festival.

Inspired by the music of Hank Williams, Roy Orbison, and Patsy Cline, and told almost entirely without dialogue, 'Lula del Ray' is the story of a lonely adolescent girl who lives with her mother on the outskirts of a vast satellite field in the mid-20th-century American Southwest. After a chance encounter over the radio, Lula becomes obsessed with a soulful country music duo, the Baden Brothers. Inspired by their music, she runs away from home and into a world of danger, deception, and disappointment.

See it if you are open to new forms. Unlike anything I have seen before a delightful combination of live performance, drawings & stick puppets.

Don't see it if you are expecting a traditional theatrical experience. This is unique and charming but it is preformed without words to live music.

See it if see it for the incredible means of storytelling. The use of puppetry and overhead projector is incredible. Unlike anything I've ever seen.

Don't see it if you are essentially watching a silent film (with a beautiful live score) but there is no dialogue and the narrative does drag a little bit.

See it if You love movement. You like compelling stories and are open to no dialogue. You like exploring the craft of theater.

Don't see it if You only like traditional theater. You are looking for a show with dialogue. You aren't open to anything new.

See it if you're interested in unusual techniques with animation, shadow, puppets. You've literally never seen anything like this before I guarantee

Don't see it if you lack imagination or wonder. You like dialogue (there's none) Read more

See it if you're in the mood for something light and unconventional.

Don't see it if you want to see something that will shake you to the core. Read more

See it if You love special effects

Don't see it if You are easily overwhelmed

"A perspective-melting world...Dreamy in all senses of the word. It tells its story in the twilight zone between shadow and substance...The production features all sorts of ingenious handmade equivalents for cinematic effects: close-ups, long shots, pans...It is a crucial part of this production’s magic that the tellers and their tale blur into a single spellbound self."
Read more

"The Manual Cinema folk from Chicago (they presented 'Ada/Ava' here last year) work their lo-fi shadow-puppet magic with 'Lula Del Ray,' another of their exquisite live-created films. They've refined their techniques to an astonishing edge...There's less risk in 'Lula' than there was in 'Ada,' and we drift along in it rather than being swept violently downriver as we were in the other work. For sheer craft, though, you'll find nothing more lovingly made."
Read more

"Almost anything a film can do, Manual Cinema can match...The tale of Lula's wanderings is consistently engaging, and, there isn't a single wasted image in the telling. Charlotte Long and Sara Sawicki play Lula and her mother; each has mastered the knack of signaling an emotion with a single shadowy gesture; they are aided immensely by puppeteers Lizi Breit and Sam Deutsch. The company's work is both charmingly naïve and surprisingly sophisticated."
Read more

"How it’s told is really more important than what it tells. Too bad neither how nor what is completely satisfying...The screen images we see are often striking, sometimes clever, but ultimately they’re just pretty pictures. Watching the puppeteers create the images is a more rewarding exercise but it too falls short. The problem is that while witnessing technique can be quite pleasurable for a while, that pleasure has a limited shelf life, which 'Lula del Ray' lavishly exceeds."
Read more

"A strange and lovely dream, full of a far-off eerie sadness and sweet mystery, like some kind of apocalyptic lullaby...'Lula Del Ray,' and Manual Cinema in general, are wholly deserving of the highest praise...There is a lot going on, and it all goes on very gracefully and, interestingly, in such a way that the audience is able to see all the inner workings—all of which are so harmonious, so fluid, that, far from detracting from the wizardry of it all, rather add a very enchanting element."
Read more

"There is much to fall in love with here, the sometimes gorgeous aesthetic...the atmospheric score...and the whole troupe’s creative vision and energy...Sarah Fornace and Julia Miller are admirable in making every gesture concrete...Still, the story of Lula’s crush on fictional crooners The Baden Brothers doesn’t take us on much of a journey...Though she blasts off finally for space, 'Lula del Ray’s' star-gazing left me earthbound, yet bedazzled all the same by Manual Cinema’s artful poetry."
Read more

"The story is in places lovely and funny and touching, but it is not the reason 'Lula Del Ray' has traveled the festival circuit for five years...The essential charm of the show rests in the marvel of ingenuity on display, the rushing around of the actors and puppeteers and overhead projector operators, to reproduce manually, on a simple screen placed on stage, the catalog of modern film techniques...Somebody at Manual Cinema clearly went to film school."
Read more

"It’s like being in the audience at an old radio show where half the fun is seeing how they do it...But in fact it’s very hard to sustain a 75-minute silent movie with no dialogue...Worse, the show bungles the story line completely in the final third...With such a simple story, the first reaction should not be audience members wondering if they missed something...Happily, watching the cast go through its paces was pleasure enough...They really need to work on their story structure."
Read more