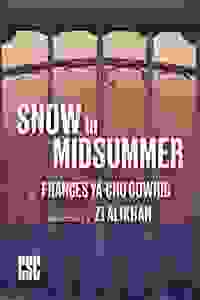 A murder mystery by Frances Ya-Chu Cowhig adapted from a classical Chinese drama.

In this ghost story, a wealthy businesswoman takes ownership of a factory in a remote drought-devastated town that was cursed by a woman executed for a crime she did not commit. The play weaves together parallel stories in a community torn apart by injustice and ecological disaster.

This production was first presented by the Royal Shakespeare Company at the Swan Theatre in February, 2017 and the U.S. premiere was by Oregon Shakespeare Festival in August, 2018.

Please note: This production contains depictions of sexual violence, brutality, and mature language. It also contains the use of haze, fog, and strobe-like lighting effects

72
Ambitious, Interesting, Nothing happens till the second act, Disappointing, Slow

See it if You like a slow story that has some unexpected twists to the plot. This is presented on a fairly bare stage so it takes some imagination.

Don't see it if You want some action or if you want a show that is paced well. The whole first half (one hour) is practically nothing but lead up to story. Read more

See it if Goes from mystic to realism. Long siloques.

See it if you want to experience a new production based on a centuries-old Chinese play in with a cast of 10, some in multiple roles. Great lighting.

Don't see it if you don't like violence. Would be rated higher if I could hear it all - some problem with accents, but mostly projection when faced away.

See it if you enjoy mysteries that require you to connect the dots. It contains ideas that suggest a parable with soap opera plot twists.

Don't see it if you are not prepared to pay careful attention to details.

See it if A story that has many things ghost, murder, love, regret and revenge.

Don't see it if It is a little slow and you need to listen well. Read more

See it if you like an unusual piece of theater that is part ghost story and part murder mystery. Very interesting story with talented Asian actors.

Don't see it if you have trouble with accents or have problems with violence on stage. There are gun scenes and assaults. Read more

See it if Have interest in the mystical beliefs in China.

Don't see it if You want a well thought out play.

See it if you like different stories, stories with twists and turns, although it involves a murder and ghosts it really is more of a myth or folk tale

Don't see it if prone to leave after the 1st act ; this definitely improves in 2nd in both acting & twists.Need great staging. Movements & sound often weak

"For 'Snow in Midsummer,' her contemporary adaptation of the classic Chinese work, however, Frances Ya-Chu Cowhig has not only added modern elements and themes to the plot ... but also reconfigured it as a supernatural murder mystery. The result, at least as presented by Classic Stage Company in the shaky New York premiere production opening tonight, is admirable but diffuse."
Read more

Too melodramatic and unconvincing to succeed, Snow in Midsummer exerts the lurid interest of a crime scene, but real engagement is undermined by ponderous pacing and an unearned air of solemnity. Whatever statement Cowhig is trying to make is obscured by a parade of melodramatic events. Its big takeaway? Beware of ghosts.
Read more

"Directed at a fever pitch by Zi Alikhan, Cowhig's play, however, lacks the edge-of-the-seat suspense one hopes for and anticipates. Instead of offering apprehension and eeriness, the production is frenetic and loud. The actors seem to be in constant motion, and tension is jettisoned through ear-splitting screams and angry shouting"
Read more

"If you knew nothing about 'Snow in Midsummer' when you walked into the Classic Stage Company theater — not having read the press release earlier, I didn’t know a thing — it’s a fair bet only a few minutes would pass before you’d suspect that Frances Ya-Chu Cowhig’s play is based on a long-revered Chinese myth or legend."
Read more

"The play is something of a soap opera. But thanks to some impassioned performances, sharp direction by Zi Alikhan, and a script that leans heavily into ancient Chinese beliefs regarding death and the afterlife, the production is never less than gripping."
Read more

"There’s an ongoing lament through 'Snow in Midsummer' that all the living plants of the town have dried up and crumbled in the drought. But the production as a whole still feels a little like a forest choked with underbrush–the trees are strong and powerful, but it’s hard to see them."
Read more

Snow in Midsummer, as transformed into contemporary terms, has too many melodramatic plot twists and contrivances of the secrets and lies category to recount; lacking theatrical panache in their presentation, they’re impossible to take seriously. Chinese classical drama is a largely musical form, with the words often sung aria-like renditions; moreover, it employs highly stylized movement and gestures. Perhaps a musical version might have worked better than this combination of realism and pseudo-poetic artifice.
Read more