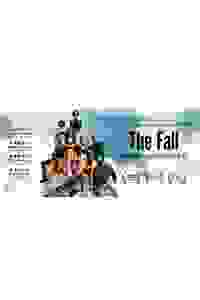 St. Ann's Warehouse presents this hit from this year’s Edinburgh Fringe, where a cast of seven actors recount their experiences as student leaders of a protest movement on the University of Cape Town campus.

The #RhodesMustFall protest movementcalled for the teardown of a colonialist monument on campus. Marshaling the power of protest songs and dance, 'The Fall' unpacks discrimination in all forms, exposing the impact of inflammatory iconography, crushing student debt and tuition fees, shedding light on similar debates here in America.

See it if Students lead a social justice movement in South Africa. Singing and chanting. Debate over the course of action. I was immersed and moved.

Don't see it if You don’t enjoy social justice plays, or the point of view of millenials. You don’t want to learn more about race & class issues.

See it if play written by cast about their involvement in a protest movement at the Univ. of Cape Town; monologues interspersed with singing

See it if You enjoy thought provoking plays about real life events and issues with great acting.

Don't see it if You want to take a blinds eye to some very poignant and troubling issues or are in the mood for something light and fluffy.

See it if you'd like a true story of South African students who want to eliminate racism and bias at their university; how far are they willing to go?

Don't see it if you're not interested in issues of race, gender, patriarchy, bias; play sometimes becomes a little preachy, but heartfelt

See it if you like thought plays. And stories that are told in non-traditional ways. And if you're interested in politics of race and humanity.

Don't see it if if the above doesn't appeal to you!

See it if you are interested in devised theatre focusing on race and inequality.

Don't see it if you aren't interested in political theatre

See it if You enjoy political ensemble pieces. You want to learn more about the student protests in South Africa, as well as race politics as a whole.

Don't see it if You do not have an open mind, are not willing to LISTEN and attempt to understand the messages that these young people are conveying.

"Stirring ensemble theater piece...Not so much a protest play, as it is a play about a protest, and that distinction is what it gives this docudrama its arresting complexity...That each cast member is such a compellingly specific presence is a blessing and a necessity...The rushing momentum of what happened, both scary and exhilarating, is most evocatively conjured by the details of first-person reminiscence...There is an infectious, heady joy in such scenes."
Read more

"There's nothing naive or immature about this rousing piece of political theater. Instead, this collective work exudes the kind of nuance and wisdom born from difficult personal experience...The kind of mature, clear-eyed hindsight that is the mark of promising young artists...Ultimately, it's that sense of blazing passion that one is left with in 'The Fall'...'The Fall' stands as a stirring testament to their adaptability and fortitude, with lessons that deserve to be heard."
Read more

"The student is the future in this powerful piece of social justice theatre...Its brutal honesty holds up a mirror that both reflects and amplifies its source. This exceedingly well-made devised piece revolves around the events during and after the Rhodes Must Fall movement in South Africa...Though experimental in nature, the piece never ventures into obscurity...The value of 'The Fall' lies in its ability to expand our existing understanding of activism."
Read more

"This fleet-footed piece blazes with a sense of injustice and yearning for change that is hard to refute...Though steaming with militant ire...the piece avoids angry agit-prop, by honouring the arc of the protest...'The Fall' invigoratingly charts the Biko-isation of a generation of students; where it will end, though, is another matter. About the role of the Zuma government in this fraught chapter the show is studiously quiet."
Read more

"It's a vivid account...If the subject seems timely, it's because the arguments have spread...If the arguments have become familiar, 'The Fall' pushes on. What happens next?...Told collectively and directly – old-school agit-prop – a lot of 'The Fall's' drama comes from heated debate. Jostling argument does the job of action and, under Clare Stopford's supervision, it covers the bases...Music acts almost as a balm...The songs stand for something in their own right as well."
Read more

"A play that’s a nuanced, compelling insight into their fight. This close-knit group erupts onto the stage, humming with energy and resolve...A series of tightly-scripted debates show them wrestling with these problems...Here, infectious dance sequences show that they've got the energy to make their theories real. But more ponderous, dragging group movements also show their struggle’s psychological toll...'The Fall' couldn’t be more topical. It captures a spirit, a cultural moment."
Read more

"The story is explosive but the storytelling itself is dynamite, as a seven-strong ensemble of former UCT drama students talk, sing, chant, dance, and stomp their way through 80 pulsating minutes of anger and sadness...The conversation of the energized student movement ranges far and wide...Throughout it all, the energy levels never falter in a production curated with confidence and spark...A valuable and vital piece of theatre."
Read more

"It is one thing to have heard about the Rhodes Must Fall campaign on the news, but it is another to see, hear, feel the story...The arguments are epic and the truths spoken and shouted here send chills down the spine as the students wrestle with being black or mixed race, rich or poor, revolutionaries or pragmatists...Whatever your views, you can feel how authentic it is. These young people, the future of South Africa, are letting us in, telling us their truths, crying for their future...I loved it."
Read more