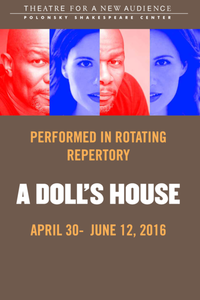 TFANA Associate Artistic Director Arin Arbus stages Thornton Wilder's English adaptation of Ibsen’s proto-feminist play, which examines a marriage held together by illusion and lies. For the first time ever, 'A Doll's House' is playing in repertory with a new adaptation of August Strindberg's 'The Father,' which was written in response to Ibsen's controversial 1879 drama. Both productions star Drama Desk Award winners John Douglas Thompson and Maggie Lacey.

See it if you want to see a very faithful interpretation of one of the most important works of Modern Drama. It's a very good but very safe production

Don't see it if you hope for anything new, edgy or original from Ibsen's controversial (in its time) masterwork about the "New Woman".

See it if like fine performances, classic drama, intimate version of the Ibsen Classic

Don't see it if don't like dramas, don't want to see family strife played out in front of you

"What really awakens the senses here is the feeling of suffocation that pervades domestic battlefields, an impression of doom woven into the fabric of a social order…It is to the credit of this interpretation that you feel not only for the painfully enlightened wife but also for the bewildered husband in torment...These twinned productions of Strindberg and Ibsen maintain a similarly low hysteria quotient, without sacrificing the plays’ anxious and compelling momentum."
Read more

“Lacey’s Nora has the makings of a modern woman. She employs every resource at her disposal to sustain a family life that happens to be a fantasy. Jesse J. Perez tends to mustache-twirl as Krogstad, but Linda Powell is nicely grounded as his former inamorata, fallen on hard times. Nigel Gore makes for a congenial Dr. Rank, one whose charm outstrips his morbidity. Thompson admirers will avidly await Torvald’s inevitable eruption, which does not disappoint—except, pivotally, Nora.”
Read more

"The battle of the sexes comes served two ways in Theatre for a New Audience’s sturdy and ever-accessible double bill of classics...Maggie Lacey plays against her girl-next-door looks...In 'A Doll’s House,' she bolts from and slams the door on her marriage. John Douglas Thompson brings depth as her spouse in each show."
Read more

“Like a 1950s sitcom wife, Lacey endows Nora with innately comedic qualities. She's flighty and cartoonish...It's not only funny, but provides for a thrilling transformation as Lacey's Nora awakens to the unjust realities governing her marriage. By contrast, Thompson's Torvald seems blissfully unaware of the negative effects of his paternalism. His epic meltdown in the final scene is one for the ages: We would leave him too.”
Read more

"A taut, tension-filled psychological battle…Maggie Lacey does not disappoint, speeding around the living room of her apartment like a wind-up toy…In Lacey's hands, Nora is a far more complex woman than one remembers…Thompson's Torvald is a finely calibrated characterization, the evident age difference between him and Lacey working to good effect…The rest of Arbus' production--which makes use of Wilder's highly speakable 1937 translation--is equally acute."
Read more

"These inspired revivals using the Thornton Wilder adaptation of 'A Doll’s House' and Scottish playwright David Greig’s new English language version of 'The Father' feature a company of actors led by the magnificent John Douglas Thompson and Maggie Lacey, all of whom appear in both plays. With the audience sitting on opposite sides of a narrow playing area with two walls removed that puts the viewers ring side, these productions are dazzling theater whether seen in tandem or seen separately."
Read more

"The plays feel more accessible and tailored to a wider audience than ever, thanks to dual outstanding lead performances in both pieces by John Douglas Thompson and Maggie Lacey. Under the capable direction of Arin Arbus, Thompson and Lacey storm through both masterworks with an intensity and passion that elevate them far above all other elements of the productions."
Read more

"An outstanding production...A strong cast carries the play...In 'A Doll’s House,' the effervescent Maggie Lacey plays the youthful, charming Nora, adopting a coquettish air whenever she wants something from her husband, Torvald (the marvelous John Douglas Thompson)."
Read more

"‘The Father’ and ‘A Doll’s House’ are always worth revisiting, and the idea of pairing these two modern classics about marriage is commendable. For all their flaws, the productions are consistently viewable and smoothly done. They're accessible and thoughtful but—aside from the magnetic Thompson—neither is particularly memorable; perhaps, in fact, that's somewhat to their credit."
Read more

"If the plot is riveting, the acting is the lynchpin to a good production. And, fortunately, the acting ensemble here is a strong one…Thompson really displays his virtuosity at the eleventh hour. Maggie Lacey, in the pivotal part of Nora, has the necessary range too, gradually evolving from the doll-like wife to the determined woman who insists on her independence…Arbus does a double slam-dunk by staging these two 19th-century works in rotation...This theatrical event is a must-see."
Read more

"TFANA presents the two works in repertory to great effect…Seeing both together makes it easy to understand why 'A Doll’s House' is the more frequently performed work...Thompson gives a standout performance here, playing Thorwald as self-absorbed and unsympathetic, but never truly evil...Lacey plays Nora to perfection…Arin Arbus’s direction works well here, especially in terms of building the tension of who will be found ultimately in the wrong…Very well done indeed."
Read more

"The thrill, the shock, the surprise, the horror, the recognition, and the sorrow are ignited by the masterful and astounding performances by Maggie Lacey and John Douglas Thompson. They each craft characters of intense complexity, which had me holding my breath, wiping away tears, and screaming loudly at them in my head...I am in awe of Lacey's monumental achievements with these two characters. Thompson’s performance broke my thesaurus."
Read more

"Lacey plays Nora as housewifely but she misses some of the inherent spine Nora has already displayed…The final scene is powerful here because this man loves Nora. He does not have time to respond to her offer of a real marriage before she exits their home…Often productions wilt at the end as Nora gains in strength and Torvald simply slides away. Not in this production...Thompson is one of our great actors and it is a treat to see him."
Read more

"Gripping and resonant...A feeling of suffocation permeates 'A Doll’s House'...Lacey seems more comfortable with the flutteringly nervous Nora than she does as the calmly composed Laura, but Douglas is perhaps a bit too subdued in Torvald’s moral righteousness and superiority...Especially affecting are how the conclusions of plays are staged, with scenes that are both haunting and damning of the characters and offer new perspectives that blur the lines of good and evil."
Read more

"Thompson’s Thorwald is all stuffy respectability, with a springy-legged half crouch that simultaneously suggests readiness for action and due deference to the system at large...Thompson’s intrinsic dignity as an actor though seems to keep him from ever being quite fully stripped bare emotionally, which blunts the power of the ending a bit...This is modern domestic drama of the highest caliber, played exceptionally well, and presented in a program that will leave you discussing it for days."
Read more

"'A Doll’s House' is a manifesto that speaks boldly even today...With humiliating clarity, Nora comes to understand how living in homes run by men has stunted her...Lacey does especially well with the lighter shades of Nora’s passionate character...Arbus and her marvelous casts invite us to place these plays beside each other and come away with a new understanding, not only of these works, not only of these playwrights, but of ourselves. Can great theater do more?"
Read more

“A great piece of theater will leave its audience having a full-out discussion. TFANA’s productions leaves its audiences having full-out debates...Staging for ‘A Doll’s House’ is mostly bright and refreshing...Maggie Lacey’s portrayal of Nora begins effervescent and carefree...Thompson’s Torvald is sincere; it is very clear he loves his wife and only wants to take care of her...The final moments of the play are a jarring and emotional experience.”
Read more