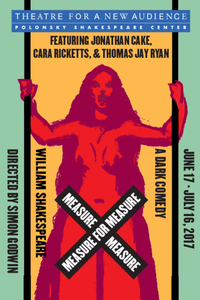 When the Duke of Vienna disguises himself as a friar among his people, he finds the city unraveling in an ethical free fall. Before he reclaims his dukedom, can he help the chaste Isabella save her brother from the condemnation of the villain Angelo? Director Simon Godwin sees 'Measure for Measure' as a high-stakes conflict of clashing ideologies—a tensely diverse world in which incompatible values collide and expose the tenuous boundary between order and anarchy. Due to sexually explicit content, the production is recommended for ages 16 and up.

See it if you like modern WS. The verse is mostly well-spoken. Ricketts stands out; every word/gesture seems real. I liked the emphasis on comedy.

Don't see it if This MFM is highly imaginative, sometimes too much so. Sex toys abound; a convict poops, all is presented on a huge "table" w/bad sightlines Read more

See it if you like great staging of Shakespeare's plays. This company is great at staging and Polonsky theater is ideal for Shakespeare.

Don't see it if you don't like Shakespeare or play Measure for Measure. I think the dialogue for this play is Shakespeare's worst. Read more

See it if you like a modern interpretation of Shakespeare's comedy. This is a story of the abuse of political power that is as relevant today as then.

Don't see it if you are a traditionalist. you do not like explicit sexual acts, abuse, and perversion of all sexes. you hold government in high esteem. Read more

See it if enjoy well done translations/interpretations of Shakespeare. Story is fair but actors put it over

Don't see it if you are a Shakespeare purist

See it if you want to see a bold and risk-taking adaptation with strong acting, particularly by Ricketts. The comedic parts were truly funny.

Don't see it if The first act dragged so much; I noticed many audience members yawning and even sleeping. Second act was much more energized.

See it if You enjoy modern takes on Shakespeare with clever directing choices.

See it if If you like to see out of the box productions of the Bard. Totally refreshing and tons of fun. Loved the band and the immersive touches!

Don't see it if If you want to see a classic production of this play.

See it if You like your Shakespeare a bit overripe. This is aimed about 85% at the groundlings among us, right from the stroll through the bordello.

Don't see it if You have more interest in the interplay of corruption, crime, punishment, virtue, impropriety, weakness and justice.

"Leans too heavily on the supposedly funny elements...But in the great confrontations between Angelo and Isabella, this 'Measure for Measure' soars just as it should into that uniquely Shakespearean plane where absolutely opposing philosophies are given equally compelling expression...There is probably no cure for the play’s tonal whiplash...What makes sense in 'Measure for Measure' makes gorgeous sense here, thanks especially to Ms. Ricketts and Mr. Ryan."
Read more

"This is dark stuff, but Godwin keeps the proceedings playful...Cake navigates the play’s rough waters heartily. The fiery Ricketts makes Isabella’s anguish soulfully real. And Ryan crafts a cunning portrait of a despot coldly certain of his infallibility. Watching the once-mighty Angelo reduced to a quivering mass is as harrowing as it is satisfying. In an age of outrage, this revelatory 'Measure for Measure' is a cry for hope and reconciliation. "
Read more

"It’s indicative of how hard it can be to find the right tone for this play, which pogo-sticks from lowbrow gags for the groundlings to highbrow verbal duels for the cognoscenti...What pleasures there are in this production emerge from the excellent verbal thrusts and parries between Angelo and Isabella that ensue in Ryan’s and Ricketts’ assured, low-temperature performances. But this is still that play in which everyone ends up married and nobody wins."
Read more

"The play feels fresh, timely, and full of contemporary relevance...The story is pretty heavy for a comedy...Simon and his cast, however, keep things light every chance they get. Most of the laughs come from the minor characters...The comedic highlight of the show is Fine, whose outlandish portrayals of four different characters have the audience in stitches...Along with the modern dress, the band's upbeat rock numbers make the action feel current and familiar."
Read more

"There were moments when I wished Godwin had given less attention to such scene-stealing antics and focused more on the complex psychology of the three lead characters...The second half of Godwin's production is stronger than the first, and everything unquestionably comes together in the climax...At long last, a production that seemed merely trendy reveals how directly it speaks to the present moment."
Read more

“The minimal sets by Paul Wills allow for quick transitions between scenes but offer only a stark sort of atmosphere. His costumes are more successful but only for the comic characters. Matthew Richards' lighting plot has some film noirish effects. While Godwin's ‘Measure for Measure’ is tricked out with a great many unsuccessful contemporary touches, it is left to Shakespeare's story to bring home the dangers of abuse of power and hewing to the letter of the law rather than the spirit.”
Read more

"A compelling new production...An insightful look at the timelessness of societal conflicts over justice, power, morality and family...While the tidy, but unlikely, resolutions at play’s end are even more implausible than many of the Bard’s other 'problem plays' the message and lesson are louder and more impactful...It isn’t often that one of Shakespeare’s lesser-known plays gets a major production, so on that basis alone this 'Measure for Measure' is a treat."
Read more

“Simon Godwin stages ‘Measure for Measure’ in modern dress with fresh bite and emotional immediacy. With a top-notch cast led by Jonathan Cake as the Duke, Godwin brings to light the rich theatrical treasures tucked within this dark play…Although you might disagree with some of his approaches to the dramatic material, his provocative vision of the tragi-comedy will imprint itself on your memory…The cast is superb."
Read more