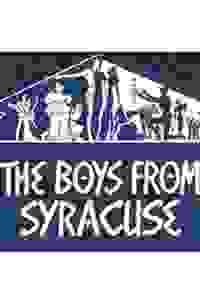 View in admin
The Boys from Syracuse
NYC: Midtown W
85
Score it Scored!

The Boys from Syracuse NYC Reviews and Tickets

Musicals Tonight presents the classic 1938 musical from Rodgers and Hart, loosely based upon Shakespeare’s 'The Comedy of Errors.'

Identical twins Antipholus of Ephesus and Antipholus of Syracuse, were separated from each other in a shipwreck as young children. Their servants, both named Dromio, are also long-separated identical twins. When the pair from Syracuse come to Ephesus, a comedy of errors and mistaken identities ensues when the wives of the Ephesians, Adriana, and her servant Luce, mistake the two strangers for their husbands. Adriana's sister Luciana and the Syracuse Antipholus fall in love. But all ends happily.

See it if you love Rodgers&Hart and want to see one of their funniest. The intelligence level of the libretto puts 2018 shows to shame. Run to see it!

Don't see it if You need traditional (read same old, same old) treatments to your revivals. This was a chancy thing to do, and it succeeded magnificently. Read more

Don't see it if You don't like men in drag

See it if You love Rogers and a Hart and camp and slap-stick and cross-dressing and vogueing and great songs and did I say camp?

Don't see it if If you like your musicals straight, literally and figuratively. Read more

See it if you enjoy a fresh take on a classic musical comedy. Outrageous and campy and fun.

Don't see it if you prefer fully staged traditional musicals or are seeking a drama. Read more

See it if You'd like to see a original and creative 'take' on a Rodgers and Hart classic with a wonderful score.

Don't see it if Farce is not your thing.

See it if The performances were exceptional, even more hilarious was the fact that some of the acting was with intentions flawed just for kicks

See it if you want to see a seldom-produced, obscure musical (which is Musicals Tonight's forte). Actors try gamely but not Rogers & Hart's finest.

Don't see it if you mind bare bones staging, costumes. 1 or 2 memorable songs but otherwise dated, confusing. Based on Shakespeare's Comedy of Errors.

“Director/choreographer Jonathan Cerullo has also upped the ante by staging it in a vaudeville/burlesque style as though this were a Marx Brothers stage show. While only one of the men in drag wears a wig, it also takes some time to get used to hearing such famous songs as ‘Falling in Love (With Love’" and ‘Sing for Your Supper’ sung in falsetto. An unusual evening in the theater, this may not be to everyone's taste, but it is certainly an elaborately worked out show.”
Read more

"It’s difficult to select individual actors above others for the excellence of their performances. All played as an ensemble...Yet all seemed subject to the frenzy and frequent mugging laid down by the show’s director...The songs were performed moderately straight and in character, providing the affection and attention they deserved. The cast’s singing voices were all first-rate, the songs delights to hear. They remain the best excuse you’d want to see this production."
Read more

"Raffish. Rambunctious. Ridiculous. Deliberately. Gay. Very. Enjoyable. Very. A totally pro shambles...A motley assemblage of shockingly shambolic talents...With a hodgepodge of no-holds-barred casting...Under Cerullo's exultant, exhausting direction and choreography everybody's giving 110 percent from the very start...It would be really ridiculous, even a sin not to mention the songs, under the loving care of musical director Rees, every one a performance gem."
Read more

"With all of the cross-dressing the production isn't shy about venturing into various levels of camp...One of the strengths of the show is that the two Dromios actually look like they could be twins...apparently they actually are...The brothers are part of a large, consistently strong and talented ensemble...A colorful and convincing production design...Cerullo directed, while his spirited choreography contributes to an at times vaudeville atmosphere. "
Read more

"A joyous and very unexpected production...Cerullo, director and choreographer, has taken the classic show and decked it out in a style that mixes burlesque, musical comedy and drag. The results are surprisingly delightful, perhaps because the underpinnings of the original remain - the tight and funny book...and the delicious score...Cerullo's mix of reverence and free-wheeling invention raises the evening to a raucous new level."
Read more