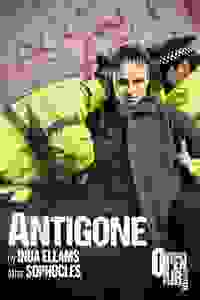 A heroic brother. A misguided son. A torn family in a hostile state. One sister is conflicted, while the other is on the run.

Although Ancient Thebes has survived a civil war, it has come at a cost. Following a bloody battle for the throne, Creon declares himself king and orders that the body of Polyneices must be left unburied. Anyone who defies this order will be killed. Antigone is resolute that she will bury her brother, Polyneices, even if it may result in her own death.

See it if A modern take on a very old play, still felt very relevant today.

Don't see it if You don't like modern adaptations of old plays.

"Though there’s a visually incandescent climax, it’s not (yet) fully moving, and there’s way too much faff at the start."
Read more

"The production seems unique in how it depicts Islam: it is most contemplative in moments of spiritual ritual, ablution and prayer spoken in Quranic Arabic, which show Islam to be first and foremost a faith – and a beautiful one – over a system of politics or symbol of identity."
Read more

"An update as ambitious as this would have a chance of working if it possessed some measure of plausibility: unlike figures from mythology, modern characters need a hinterland. Sadly, there’s no depth or nuance."
Read more

"The play balances order against chaos and the individual against the state...It’s a shame, then, when the rhetoric devolves into bald-faced placard-waving, no matter how laudable the sentiments expressed."
Read more

"There is something refreshing about seeing these issues - the human consequence of inhumane policies - tackled on stage in such a direct way as well as seeing Muslim prayer and ritual presented with reverence and care."
Read more

" 'Antigone's' tragedy probably won't make you cry, but it might well make you furious."
Read more

"The contemporary relevance is so vigorously and insistently overstated that we lose sight of the story, and the play never achieves the raw, elemental power that tragedy demands."
Read more

"This is a particularly dark offering for a theatre that has historically offered more pastoral fare. Programme diversification is, of course, a good thing but this production probably isn't likely to be one of most visitors' most cherished memories of this wonderful venue."
Read more