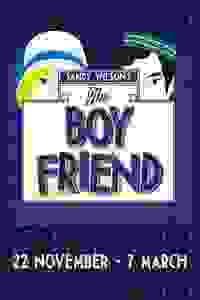 A fun revival of Sandy Wilson's show which pays tribute to classic musicals of the 1920s.

Set in the South of France 1920s, this musical follows the young girls attending Madame Dubonnet's finishing school. Polly is ashamed by her lack of male suitors but is hopeful that she'll meet the one! Created by Sandy Wilson in 1953, the revival of this British musical is directed by Matthew White.

See it if A solid revival of a terrific show . The ladies were particularly wonderful and charming.the dancing was first rate

Don't see it if Some minor tampering with act 2 to make it more PC was really unnecessary in my opinion. IT WAS STILL ENTERTAINING AS IS.

Not so much a musical as a lobotomy with songs, Sandy Wilson’s 1953 opus ‘The Boy Friend’ is an exercise in frothy escapism so extreme it’s basically trolling us.'
Read more

As daft and delightful as a pink meringue, Sandy Wilson’s 1954 pastiche of jazz age entertainments is a fine antidote to our vicious times...Terrific, frivolous fun...'
Read more

The revival of Sandy Wilson’s pastiche Twenties musical carries a particular quality of uplift...It could all be rather enervating but the sheer polish and panache of the cast’s fluttering antics brings a smile to the lips...'
Read more

...downright fun and utterly joyous...this is a show with hardly a thought in its giddy head, merely a determination to delight and entertain.'
Read more

An exuberant jaunt to the Riviera...This pitch-perfect revival of Sandy Wilson’s 1953 musical is a positive invitation to dance.'
Read more

Well, there is nothing to dislike exactly. It’s more a question of how deeply you can fall in love with a story that is so terribly, terribly slight...It’s nonsense, but nice.'
Read more

While White’s production has those occasional moments, its comedy isn’t always on the mark; too indulgent...But, mostly, for a couple of colourful hours of song and dance and silliness, being in Nice is nicer than not.'
Read more