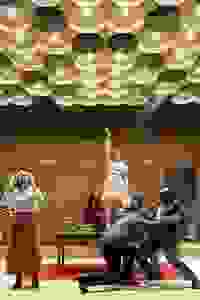 Gorky's riveting play about a matriarch who attempts to save the family's dynasty from decline.

See it if you fance seeing a decent drama with decent acting, though nothing special.

Don't see it if if you are expecting something special or extraordinary. Read more

The capable actors are directed, it seems, to extremes of caricature and over-acting...the year's most disappointing show so far.
Read more

You have a sense of everyone working very hard to make something fly. Vassa remains resolutely earthbound, not quite funny enough or black enough to make its mark.
Read more

I have seen shows worse than Vassa, but I have seen few productions with a less sure sense of what they are.
Read more