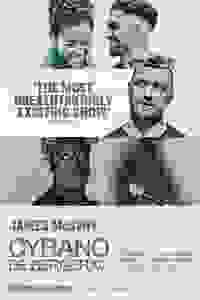 Set in 1640s Paris, romantic poet and French officer of the guard, Cyrano de Bergerac, falls deeply in love with his cousin Roxane. Insecure due to the size of his nose, Cyrano seeks to find a way to express his love. The Jamie Lloyd Company production, adapted for modern times by Martin Crimp, won the 2020 Olivier Award for Best Revival.

See it if you are a fan of Jamie Lloyd or James McAvoy, else you like to see weird quirky plays that make you wonder what's the point.

Don't see it if you have seen and liked any other production of Cyrano or if you'll struggle to not roll your eyes when McAvoy talks about how ugly he is. Read more

Don't see it if you prefer a traditional play, the stage is bare.

See it if McAvoy commands the stage in this bold recalling of the classic story. Even with a blank stage, this story has never felt so large.

Don't see it if If you're not a fan of bold retellings of classic stories, this one won't win you over.

See it if Brilliant acting and a clever interpretation of the play. No big nose, just straight acting

Don't see it if Traditional theatre

Don't see it if You don’t enjoy contemporary art

See it if You like great acting as James McAvoy is so good in this one, very heartfelt and entertaining

Don't see it if You don’t like the story, that’s the only reason why anyone would dislike this I think

See it if You think James McAvoy's brilliant and you like witty, clever retellings with lots of wordplay.

Don't see it if Don't let it spoil other versions that you may have seen by attending this performance,completely spoilt

If anything, this breathtakingly thrilling production by Jamie Lloyd - and the tour-de-force central performance by James McAvoy as the eponymous, big-nosed soldier-poet - have only become deeper and richer since the 2019 premiere. Maybe the last two years have made its themes of separation and loss more profound.
Read more

It’s a daringly contemporary re-working which will be remembered for one of the most imposing performances of the decade. [However] the slackening of pace in the second half was unmistakable.
Read more

Lloyd’s production delights in the music of voices – coupled with the Ringham brothers’ sound design and Vaneeka Dadhria’s beatboxing – it continually underscores the fact that this play is, as much as anything, an impassioned love letter to the power of words.
Read more

Don’t mention the nose. That’s the warning offered to anyone in the vicinity of Cyrano de Bergerac, who, in James McAvoy’s fiercely charismatic portrayal, is a powder keg of a man: one quip about his legendarily large proboscis and he’s apt to explode.
Read more

Writers are fighters and the word is everything in this firecracker show about passion, rejection, and the crazy genius of the spoken word. The rapiers, intrigue and censorship of Cardinal Richelieu’s Paris, circa 1640, are modernised as razor-sharp banter about love, sex, and – nudge, wink – cultural appropriation.
Read more

It doesn’t have the euphoric effortlessness and virtuoso authenticity of ‘Hamilton’; but it’s not a million miles off...Lloyd and co have cooked up something pretty remarkable.
Read more

Complex ideas about love, literature, body image and truth are expressed in its dizzyingly clever rhymes, but essentially it remains a captivating, tragicomic romance.
Read more

I’ve barely scratched the surface of a show that cuts to the core of a classic and what it means to be alive. I defy anyone not to fall in love with it.
Read more