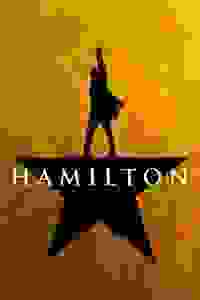 As an immigrant to America, this musical tells the story of how Hamilton climbed his way to become one of America's Founding Fathers and invent the American Financial system through the strength of his writing.

See it if you want to experience a brilliant night of entertainment where the music, humour and intrigue are non-stop.

Don't see it if you really, and I mean really, can't get on board with rap music at all- give it a chance though and you'll be pleasantly surprised!

See it if you want an evening of fun, clever writing, and great singing

Don't see it if your only option is a crazy-expensive ticket (the show is good, but not worth the batty prices) Read more

See it if you want a great night out with a LOT of words.

Don't see it if you are expecting anything groundbreaking in terms of staging. It's pretty traditional.

See it if One of the best things I've ever seen on stage and I'm not even a musical fan. Each line is so well written it.

Don't see it if you don't like a sung through show

See it if You want a show stopping show with an amazing story, dancing, singing, music.

Don't see it if You’re looking for something quieter and calmer. This show is full on and requires a lot of attention throughout.

See it if You want to see the show that’s still the hottest show on Broadway.

Don't see it if You don’t want to sit through a show about history or don’t know much about the American Revolutionary War. Read more

See it if you’re a fan of the sound track and the work of Lin Manuel Miranda. If you don’t know the songs going in it’s probably worth reading wiki!

Don't see it if you dislike rap music or American history.

"‘Hamilton’ is stupendously good...Actually better than the hype suggests...A ferociously enjoyable show...Kail’s restaged Broadway production is confident but not flashy...The first half of the show has the most terrific sense of velocity I’ve ever experienced in a theatre production...The second half is bleaker...The ending is soulful and sad and lower-key than you might expect...The best and cleverest thing on the London stage...It is a great work of entertainment.”
Read more

"It really is as good as we’ve been told. Can you quibble that it’s a bit too cold, a bit too clever, and a bit too crammed with exposition? Perhaps, but it displays an artistic sophistication that makes most of its British counter-parts look like they’re mumbling into their shoes in comparison...The ingenious collision of contemporary sounds and 'colour-conscious' casting with period-dressed historical subject-matter makes us see this epic as a biography of the dawn of the USA itself."
Read more

“Though nudging three-hours in length, it unfolds fluently and fast, whirring us through the scenes of Hamilton's incident-packed life...The first half has an exhilarating punch...The second is arguably even better...It is one of those rare shows where each part clicks perfectly into every other. It has a justness to it. Kail's powerful production honours the complexity of the writing, while keeping things direct and simple. There's nothing extraneous.”
Read more

“Miranda’s rollercoaster of a show boasts outstanding performances and charts the life of the US founding father with political passion and nimble wit...There are times in the second half when the show’s virtuosity becomes a little taxing...But this is a show that moves with intoxicating speed and combines historical sweep with attention to detail...An invigorating and original musical that celebrates America’s overwhelming debt to the immigrant.”
Read more

“The saga of the American War of Independence and a look at the teething problems of a new nation are presented in the shape of a bona fide game-changer of a musical...A piece that is obviously a magnificent achievement. Miranda’s synthesis of the historical material is phenomenal, as is his supple control of the diverse musical idioms.”
Read more

"That this has all emerged from the mind of one man, Lin-Manuel Miranda, is extraordinary...That’s surely what gives the production its feeling of unity. Direction, set, choreography, lighting, and the other elements that usually transform a piece are, in this instance, barely more than light touches dabbed on the canvas so as not to disturb the masterwork underneath...Every melody and lyric that Miranda introduces has purpose beyond its initial meaning."
Read more

“”Hamilton’ is a knockout, and its cast is superb...The lyrics are densely packed, and their bristling intricacy justifies Miranda’s thesis that hip-hop is the authentic sound of the American Revolution...With its fresh take on the politics of opportunism ‘Hamilton’ feels sharply topical, but it’s also the best kind of history lesson. There are a few dramatically expedient inaccuracies, but Miranda knows which liberties are worth taking, and he makes the past exciting...Believe the hype.”
Read more

"As good as the hype but not in the way I thought it would be. I wasn’t so much moved as riveted...They’re telling it loud and proud, with non-stop rap, hip-hop, R&B, bolstered with ballet, jazz dance and cartwheels. In a word, wow...Thomas Kail directs what is a blockbuster. I didn’t want the interval to happen and was sorry when the show ended. The energy comes from both the sweeping music and the choreography but, mostly, from the force of the story."
Read more