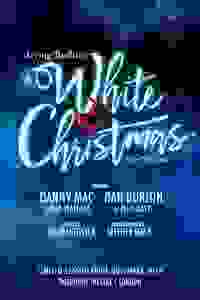 A beautiful romantic comedy based on the 1954 film of the same name set during WWII.

See it if Your looking for a good entertaining Christmassy show.

See it if you love the traditional film. It’s followed quite closely.

Don't see it if you don’t enjoy slower musicals. This did feel drawn out at times.

See it if You love the film and want to see something festive.

Don't see it if You want an absorbing adaptation of the film with great staging, great acting and great singing.

...it’s all as shiny as a newly unwrapped Christmas tree bauble. But the memory of it will swiftly be boxed away and left alone, too. A treat with a lower-case t.
Read more

White Christmas is a sturdily old-fashioned version of a jukebox musical of genuine classics...As an opportunity to bask in a festive soundtrack, there's hardly a more lovely show in town.
Read more

...the stage musical is a pale imitation of the movie and about as alluring as a Christmas tree that has lost half of its needles — no matter how much tinsel you hang around it, the bare patches are hard to ignore.
Read more

Whatever you’ve been dreaming of, this isn’t quite it...But David Ives and Paul Blake’s adaptation, which premiered in the US in 2000, thins out the plot, weakens the characters, and removes most of the drama.
Read more

With firecracker performances and singalong sounds, this version of the Bing Crosby classic glistens with sexy razzmatazz, but tenderness lies beneath the shiny surface.
Read more