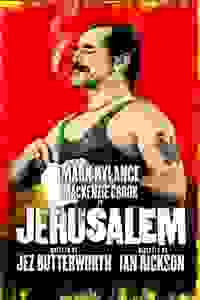 It's St. George’s Day, and Johnny 'Rooster' Byron is wanted by the Council, his son wants to go to the fair, Troy Whitworth wants revenge, and Rooster's vagabond friends want to get their hands on his supply of drugs and alcohol.

Mark Rylance ('The Phantom of the Open') returns to the role which earned him the Best Actor prize at the Olivier and Tony Awards.

Since its premiere, 'Jerusalem' has been heralded as one of the greatest plays of all time. The production is recommended for ages 14+.

Don't see it if you aren’t into complex, unclear narratives that you’ll have to ask someone else to explain to you. (Or maybe that’s just me…)

See it if you love acting with a capital A.

Don't see it if the runtime is intimidating. Read more

See it if you can't miss the best British play of the 21st century, with a life-changing performance by the force of nature that is Mark Rylance.

Don't see it if under no circumstances should this theatrical event be missed. Yes, it is long, but the play grows and deepens, ending on a memorable climax Read more

Don't see it if it took a while to really sit with me before i began to really understand the enormity of what i had witnessed.

See it if You love to withness ambitious staging, great acting and stories about real people

See it if you are willing to overlook dated and imperfect text for the benefit of seeing an amazing one-of-a-kind performance from Mark Rylance.

Don't see it if you are easily offended by political incorrectness. Read more

See it if you are Mark Rylance fan, into british dark comedy like Little Britain or Transpotting

Don't see it if you do not like actor throwing stuffs (including liquid) to the audience, or if you expect to see a serious drama play

See it if You want to see a powerful play exploring nationalism and the notion of "home". Mark Rylance & Jack Riddiford give masterful performances.

Don't see it if You don't like strong language, crass discussions or long shows (didn't get out of the theatre until 11pm!)

Mark Rylance lets the old magic flow once again. ‘Jerusalem’ remains fresh and unexpected. In a weird way, its legend contributes to that.
Read more

Together, this exemplary ensemble give us a breath-taking portrait of backwater England that roves from the profane to the sublime, a crucial theatrical rite, fit for the ages.
Read more

Does Jerusalem deserve this revival? Unquestionably, yes. You could watch this play, and Rylance’s performance, every night of the too-short run and still find new dimensions to wonder at.
Read more

[Rylance's] performance is such a wonder it's hard to describe. Every nuance is felt; his identification with the character so strong that he simply is. But the strength of the production is the way that the new group of youngsters who surround Rooster. It is quite simply just wondrous.
Read more

Rylance’s titanic performance as the gypsy Rooster really is one for the ages. Wild and whimsical, uproarious and desolate, Butterworth’s play is still a mighty force of irrepressible live theatre.
Read more

Jerusalem is the greatest play and Mark Rylance’s performance the greatest performance of the year. Of the decade. Of the 21st century. For all its interplay of past and present, reality and myth, it’s a phenomenal piece of theatre.
Read more

In this revival ... all the old magic is intact and potent as ever. Perhaps it overly romanticises its drug-peddling hero, but with Rylance in the role, its spell is irresistible.
Read more

Mark Rylance is crucial to all this. The rest of Butterworth’s colourfully off-kilter characters, too, are brought to life by a truly impressive cast. The intricate tapestry of Butterworth’s engrossing drama is the fabric that ties together these moments of unforgettable artistry.
Read more